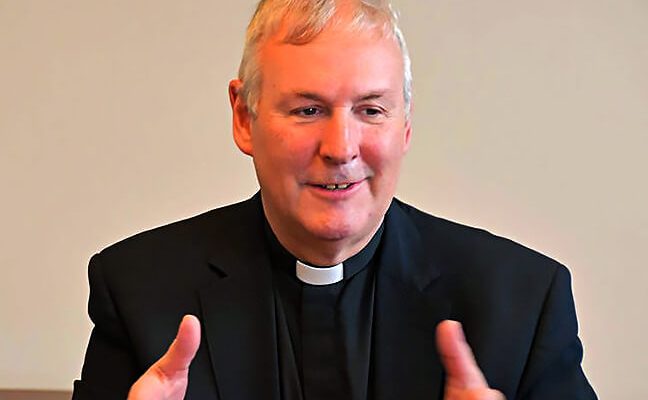 Canon David Oakley has been named the next Bishop of Northampton

Canon David Oakley, Rector of St Mary’s College, Oscott, the largest seminary in England and Wales, has been named the next Bishop of Northampton.

He succeeds Bishop Peter Doyle, who has reached the retirement age of 75, and will take over the governance of a diocese made up of almost 70 parishes spanning Bedford, Buckingham, Northampton and parts of Berkshire.

Known for his pastoral ministry, Canon Oakley told The Tablet that he hopes to accompany and strengthen the people of his new diocese against the challenges posed by secularisation and political and social division; while also bringing Church teaching to bear on issues of social justice and the environment crisis.

“The Church’s work is to do what the Lord asked us to do, to preach the Good News to the poor, to people who feel lonely and abandoned in this uncertain time, with all its divisions and challenges,” he said.

A passionate evangelist and catechist, Canon Oakley is a Secular Carmelite and for many years belonged to the Jesus Caritas Fraternity for diocesan priests, a group inspired by the life and writings of Blessed Charles de Foucauld. He has been described as a pastor in the mould of Pope Francis, but Canon Oakley said that he was equally inspired by Popes Benedict XVI and St John Paul II, and said that he had been inspired in particular by Pope Benedict’s 2009 encyclical Caritas in veritatae.

Canon Oakley criticised the hostile factionalism emerging in the Church, and particularly on social media. In 2018, he spoke to The Tablet about the challenges of forming priests in a digital age, arguing that it was a “caricature” to say that today’s young seminarians are traditionalists. In September 2018 he dismissed claims from a former member of staff at Oscott, published on the conservative website Church Militant, that the college was run by a “homosexual clique.”

“Where is this coming from in the Church? I don’t use Twitter, but I’ve seen people throwing angry ‘grenades’ at each other – asking, are you a Benedict person or a Francis person? We have to see the continuity with what went before. The style [of this pontificate] is different but the substance is the same,” he told The Tablet this week.

“We make a mistake if we think we have to be either intellectual or run soup kitchens. It’s not an either/or, it’s both/and – look at the life of Christ: he lived with the poor, but he could also engage with the doctors of the law in Jerusalem!”

Canon Oakley has served as Rector of St Mary’s College, Oscott, in the Archdiocese of Birmingham, for seven years. The majority of his priestly ministry has been spent working in parishes, although he has completed a PhD in Pastoral Theology and studied catechesis at the Maryvale Institute. “With my car, I get in, I hope it goes, if it doesn’t I call a mechanic. I don’t know what’s going on under the hood. But with the Church I like to look under the bonnet – I don’t like the obvious, banner headlines. I want to see what’s really there,” he said.

Canon Oakley said his appointment came as a complete surprise, and that he had anticipated returning to life as a parish priest in Birmingham after his role leading Oscott ended.

“For a few weeks I was the only one who knew [of this appointment], and I wondered – why me Lord? I don’t have a posh accent, I didn’t go to a posh school, I trained at Oscott not in Rome. I stood at the [Christmas] crib and thought, I need the faith of Our Lady and St Joseph and the shepherds – their poverty really moves me.”

Canon Oakley said he would miss Oscott but looked forward to the move to Northampton.

“The first thing is to get to know the diocese, who the people are, what they are passionate for; to stand alongside people and really listen to their needs. I love the way that on the road to Emmaus Our Lord walks with the disciples in a silent way, he listens to them in their brokenness, and they encounter him in the breaking of bread – rather than him saying to them, ‘this is my vision’.”

Among the opportunities he identified in particular was the Church’s ability to respond to the environment crisis, as outlined in Pope Francis’ encyclical Laudato Si’. “It’s challenging, though, because people think – for example – I don’t live in Australia, so the crisis doesn’t affect me – so they don’t see the need for the conversion of hearts and minds.”

Cardinal Vincent Nichols, who will celebrate Fr Oakley’s ordination as a bishop on 19 March 2020, the Feast of St Joseph, offered his “sincere prayers and total support” to the new bishop while adding that Bishop Doyle would be “much missed”.

The Diocese of Northampton is a suffragan of the Archdiocese of Westminster, and Fr Oakley served as a priest in Birmingham when it was led by Cardinal Nichols.

He is the second leader of Oscott College to be chosen as a bishop in the last five years. On 14 March 2015, the Pope appointed then rector, Patrick McKinney, as the Bishop of Nottingham.