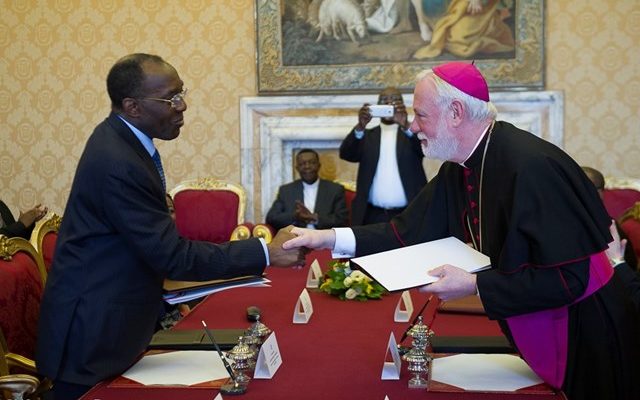 On Friday, January 17, His Eminence Cardinal Pietro Parolin, Secretary of State, and His Excellency Mr. Félix Antoine Tshisekedi Tshilombo, President of the Democratic Republic of the Congo proceeded to exchange the instruments of ratification of the Framework Agreement between the Holy See and the Democratic Republic of the Congo on matters of common interest, signed in the Vatican on 20 May 2016.

Present at the solemn ceremony included high officials of the Holy See: H.E. Archbishop Paul Richard Gallagher, Secretary for Relations with States, H.E. Bishop Ettore Balestrero, Apostolic Nuncio in the Democratic Republic of the Congo; SELF. Archbishop Marcel Utembi, President of the National Episcopal Conference of the Congo (CENCO);

Msgr. Mislav Hodzić, Councillor of Nunciature to the Secretariat of State; Don Donatien Nshole, Secretary-General of CENCO and from the Democratic Republic of the Congo: H.E. Marie Tumba Nzeza, Minister of State and Minister of Foreign Affairs; Mr. Fortunat Biselele, a private adviser to the Head of State; Pacifique Kahasha, Head of State Mission Officer; SELF. Mr. JeanPierre Hamuli Mupenda, Ambassador to the Holy See.

The Framework Agreement entered into force on the same day in accordance with article 21 § 1 of the same Agreement. Taking note of the respective independence and autonomy of the Church and the State, the Document establishes the legal framework for mutual relations. In particular, the freedom of the Church in apostolic activity and in the regulation of matters within her competence is sanctioned.

In addition, various areas are regulated, including Catholic educational institutions, the teaching of religion in schools, the Church’s assistance and charitable activities, pastoral care in the Armed Forces and in the penitentiary and hospital institutions, the property regime and tax, obtaining entry visas and residence permits for religious personnel. It provides for application agreements between the Episcopal Conference and the State on some matters of common interest.

During the cordial discussions, the good existing bilateral relations were evoked, as was the satisfaction at the ratification of the Framework Agreement between the Holy See and the Democratic Republic of the Congo on matters of mutual interest.

In this context, the contribution of the Catholic Church in the democratic process, and in promoting the common good and integral development of the nation, especially in the fields of education and healthcare was highlighted.

Attention then turned to the country’s current situation, with particular reference to the sufferings of the population in the eastern provinces, due to persistent armed conflict and the spread of the Ebola virus.

Finally, mention was made of the urgency of collaboration and cooperation at the national and international level, to protect human dignity and to promote civil coexistence, starting from the many refugees and displaced persons who are facing a grave humanitarian crisis.

Early in the day, the Holy Father Francis received in audience the President of the Democratic Republic of the Congo, His Excellency Mr. Félix Antoine Tshilombo Tshisekedi, accompanied by His Excellency Archbishop Paul Richard Gallagher, Secretary for Relations with States.