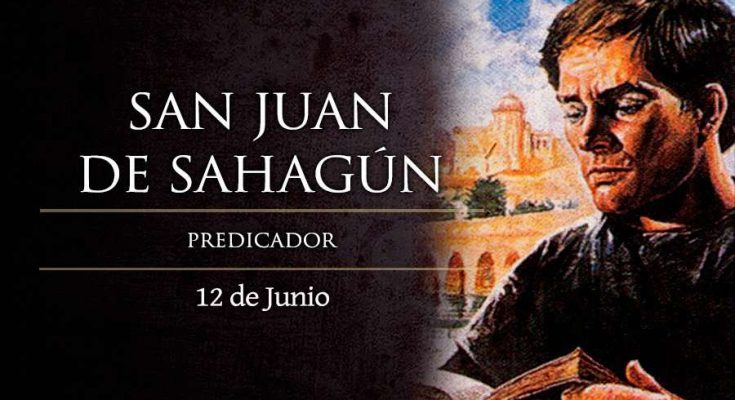 He was born González and received his early education from the monks of the Royal Monastery of St. Benedict in his native city, a leading religious and educational center in the region known as the Cluny of Spain.

He received the tonsure while still a youth which was according to the custom of day. After this, his father procured for him the benefice of the neighboring parish of Tornillo. Remember that these were the Dark Times in the history of the Church.

He was later introduced to Bishop Alfonso de Cartagena of Burgos who was impressed by him. The Bishop had him educated at his own residence, gave him several prebends, ordained him a priest in the year 1445, and made him a canon at the Cathedral of Burgos.

Possessing all these offices simultaneously caused him many uneasiness of conscience, as it was contrary to Church law. He soon resigned everything, but retained only that of the Chapel of St. Agatha in a poor neighborhood of the city, where he said Mass, preached and the faith to the poor. He then began to lead a life of strict poverty and mortification.

With his Bishop’s consent, González obtained permission to enter the University of Salamanca, where for four years applied himself to the study of theology. During this time, he exercised the ministry at the chapel of the College of St. Bartholomew and held that position for nine years.

He devoted himself to pastoral care. He got sick and he was obliged to undergo an operation for the removal of kidney stones. He vowed that if his life were spared, he would become a Religious.

Upon his recovery in the year 1463, González applied for admission to the Order of Hermits of St. Augustine, at the Monastery of St. Peter. From that point on, he was known simply as Brother or Friar John.

The following year, on August 28, 1464, John made his profession of solemn vows as a member of the Order.

By the command of his superiors, John gave himself wholeheartedly to the salvation of souls, and with the best results, preached the Word of God. By his zeal, he was able to effect the entire reformation of the city of Salamanca.

John made such progress in religious perfection that he was soon appointed master of novices, and later in the year 1471, prior of the community. He conducted the Religious under his rule more by example than by his words.

Great was St. John’s devotion to the Blessed Sacrament, that at the celebration of Mass he frequently saw the Sacred Host resplendent in glory. He was gifted with a special power to penetrate the secrets of conscience, so that it was not easy to deceive him, and sinners were almost always forced to make good confessions. He was able to obtain wonderful results in doing away with enmities and feuds.

In many ways, John was like a fellow Religious who lived nearly 500 years later, Pio of Pietrelcina, also known as Padre Pio who also had the uncanny ability to discern the secrets of conscience.

In his sermons, John preached the Word of God and scourged the crimes and vices of the day, by which the rich and noble were offended. He soon made many enemies who went so far as to hire assassins, but these, awed by the serenity and angelic sweetness of his countenance, lost courage.

Some women of Salamanca, embittered by the saint’s strong sermon against extravagance in dresses, openly insulted him in the streets and pelted him with stones until stopped by a patrol of guards.

John’s scathing words on sins of impurity produced salutary effects in a certain nobleman who had been living in open concubinage, but the woman swore vengeance. It was popularly believed that she had caused the saint’s death by poison.

John died on 11 June 1479, in his monastery. Truth and Virtue belong to the simple and gentle soul seeking to do the will of God through His Word.

Happy feast day to all John. St. John, pray for us.

One thought on “Saint of the day: St. John Sahagùn, Priest”