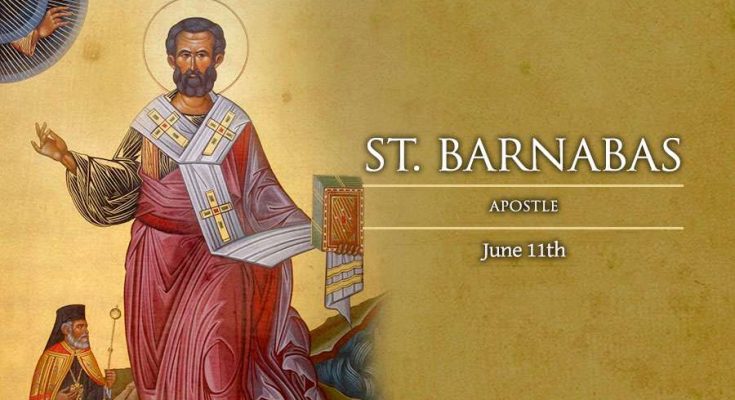 Though not one of the twelve, St. Barnabas is considered an Apostle by the Church. He was a Jew of the tribe Levi, but born in Cyprus. He was closely associated with St. Paul. He introduced Paul to Peter and the other Apostles.

When a Christian community began at Antioch, Barnabas was sent as official representative of the Mother Church of Jerusalem to unite it’s members in the fold of Christ. He and Paul gave instructions to the Christians in Antioch for a whole year.

Later, Paul and Barnabas were sent by Antioch officials to preach to the Gentiles. Great success crowned their efforts but all was not peaceful.

They were expelled or sacked from some towns. Later, Barnabas took Mark to Cyprus separately and Paul took Silas to Syria.

Barnabas is spoken of simply as one who dedicated his life to the Lord. He was a man filled with the Holy Spirit and faith, through whom large numbers were added to the Lord’s followers.

Barnabas died a martyr at Cyprus during Nero’s reign with the Gospel of St. Matthew, written by his own hands, on his chest.

May God the Holy Spirit help us to evangelise without fear just like St Barnabas did. Amen

St Barnabas, pray for us, Amen. Happy feast day to all Barnabas.