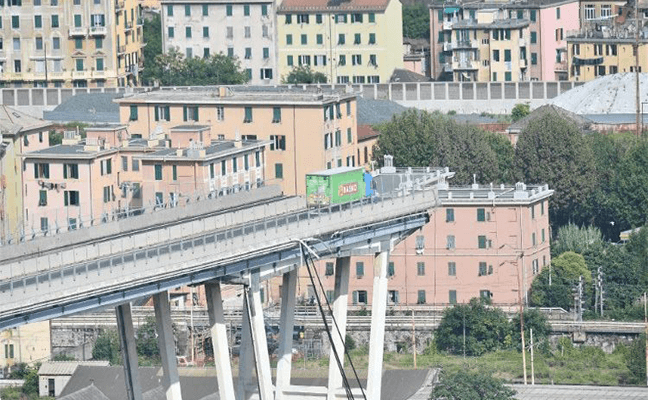 Almost a year has passed since the collapse of the Morandi Bridge, which caused the death of 43 people. Pope Francis remembers that tragic day in a letter sent to the Genoese newspaper “Il Secolo XIX”, also published in other newspapers of the group Gedi News Network.

A wound inflicted on the heart of Genoa, “a tragedy for those who have lost their relatives”, “a shocking event for those who have been forced to leave their homes living as displaced persons”. In a letter to the newspaper “Il Secolo XIX”, Pope Francis recalls the dramatic moments experienced by “families who left or returned from their holidays, men and women who were traveling for work. The Pope did not forget that tragic event and offered his own prayer:

“I want to tell you that I have not forgotten you, that I have prayed and pray for the victims, for their families, for the wounded, for the displaced, for all of you, for Genoa. In the face of events of this kind, the pain for the losses suffered is piercing and not easy to alleviate, as is the feeling of not resigning oneself in the face of a disaster that could have been avoided.”

Above all, we must pray

Pope Francis writes that he has no “pre-packaged answers” because in the face of certain situations “human words are inadequate”.

“I have no answers, because after these tragedies we have to cry, remain silent, question ourselves on the reason for the fragility of what we build, and above all we have to pray.”

Do not erase memory

The Pope then has a message that flows from the “heart of father and brother”: “Do not let the events of life break the bonds that weave  your community, erase the memory of what has made its history so important and significant. I always think of the port when I think of Genoa. I think of the place from where my father departed. I think of the daily toil, the stubborn will and hopes of the Genoese”.

From the Pontiff, there is also the exhortation to turn our gaze to Jesus, who “passed before us through suffering and death”. “He was despised, humiliated, beaten, nailed to the cross and barbarously killed”. God’s response to our pain, the Holy Father observes, “was a closeness, a presence that accompanies us, that does not leave us alone”. “Know – adds the Pope – that God our Father has responded to our cry and to our question not with words, but with a presence that accompanies us, that of His Son”. “Let us look to Him, let us entrust to Him our questions, our pain, our anger.

“We are men and women full of defects and weaknesses, but we have a Merciful Father to turn to, a Crucified and Risen Son who walks with us, the Holy Spirit who assists us and accompanies us. We have a Mother in Heaven who continues to lay her mantle on us without ever abandoning us.”

Do not lose hope

In the letter, Pope Francis also stresses that the people of Genoa are “capable of great gestures of solidarity”, do not give up and know how “to stand by those in greatest need.”

“I would also like to tell you that you are not alone because the Christian community, the Church of Genoa, is with you and shares your sufferings and your difficulties. The more we are aware of our weakness, of the precariousness of our human condition, the more we rediscover the beauty of human relations, of the bonds that unite us, as families, communities, civil society.”

“After a great tragedy that has wounded your families and your city – concludes Pope Francis – you have been able to react, get up, look ahead. Do not lose hope, do not let it be stolen. Continue to stand by those who have been most affected.”