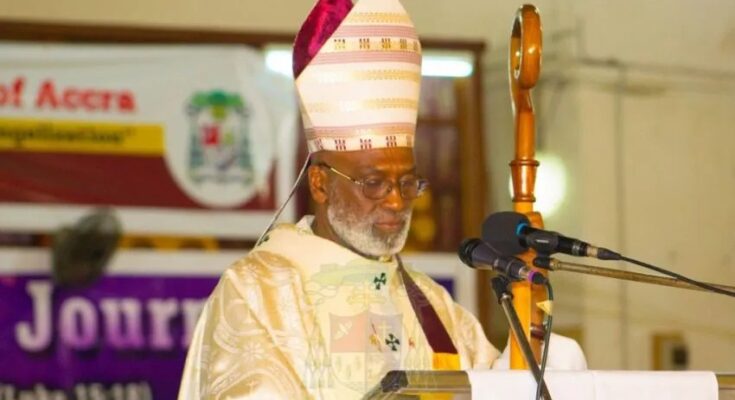 A Roman Catholic Priest of Ghana’s Cape Archdiocese has been suspended by his Local Ordinary for refusing transfer and for establishing and managing a “Prayer Camp” on his own.

The suspension of Rev. Fr. Robert A.K. Oduro which takes immediate effect was given by the Most Rev. Charles Gabriel Palmer-Buckle, the Metropolitan Archbishop of Cape Coast on June 3, 2022, the memorial of St. Charles Lwanga and the Holy Martyrs of Uganda.

Stating the reasons for the suspension, Archbishop Palmer-Buckle indicated in a letter to the Priests, Religious, the Laity and the general public that  “After your refusal of transfer effective January 1, 2022 from St. Paul’s Parish, Assin Jakai to the Archdiocesan Secretariat, Fourth Ridge, Cape Coast and your subsequent acts of establishing and managing a “Prayer Camp” on your own.”

“Thereafter, I have closely followed the events of your refusal to respond to my invitation to you for further discussion on your Ministry as a Roman Catholic Priest of the Archdiocese of Cape Coast,” the letter dated June 3, 2022 added.

According to Archbishop Palmer-Buckle, “I recall my personal visit on Sunday, April 24, 2022 and that of my official delegation later to your “Prayer Camp” inviting you for further discussion and discernment on your Ministry as a validly ordained Minister of the One, Holy Catholic and Apostolic Church and member of the Presbyterium.”

“You have, however, persisted in your obstinacy and refusal to respond to any call extended to you for a dialogue on the matter. Given these acts of disobedience, I hereby write to suspend you with immediate effect from Ministry as a Roman Catholic Priest and accordingly, I bring this to the notice of the Priests, Religious and the Laity of the Catholic Archdiocese of cape Coast and to the general public to the effect that you cannot function as a Catholic Priest until this suspension is revoked.”

What does it mean that a priest is suspended? It means that a priest has been removed in part or in full from his ministerial activities as a cleric and that some of his faculties may be restricted.

Simply, he may no longer be able to act as a Catholic priest, nor to celebrate Holy Mass or wear a Roman collar in public. Each situation is different, depending on the reason for the suspension, such being outlined by the Bishop in his letter to the priest.

The Code of Canon Law related to this matter is: Can. 1333 §1. “Suspension, which can affect only clerics, prohibits:

1/ either all or some acts of the power of orders;

2/ either all or some acts of the power of governance;

3/ the exercise of either all or some of the rights or functions attached to an office.

§2. A law or precept can establish that a suspended person cannot place acts of governance validly after a condemnatory or declaratory sentence.

2/ the right of residence which the offender may have by reason of office;

3/ the right to administer goods which may pertain to the office of the person suspended if the penalty is latae sententiae.

§4. A suspension prohibiting a person from receiving benefits, a stipend, pensions, or any other such thing entails the obligation of making restitution for whatever has been received illegitimately, even if in good faith.”

Some reasons for suspension could be disobedience to Local Ordinary, changing the liturgy (words of the Mass), distributing communion contrary to Catholic teachings (non-Catholics, gay community, etc…), drug dealing, physical or sexual abuse of a child or adult, refusing an appointment by his Bishop, sexual activities (relationship with a woman), supporting abortion, supporting homosexuality, supporting married priests, supporting same-sex marriage, theft of Church funds and others.

Suspensions can be temporarily or permanent, depending on the situation.  However, suspensions can be appealed to the Vatican’s Congregation for Clergy. When a priest appeals his suspension, the execution of the penalty is suspended until such time as the Vatican has made a decision on the matter. (Can. 1353 “An appeal or recourse from judicial sentences or from decrees, which impose or declare a penalty, has a suspensive effect.”)