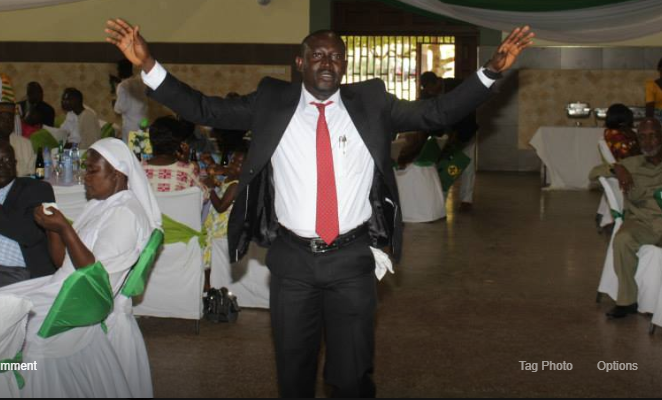 On this same day, one of the illustrious sons of the Church in Ghana marks his birthday. Radio Angelus has for sometime now observed this gentleman and has concluded that he is worth celebrating.

If you are an ardent reader of The Catholic Standard , We are sure one of the by-lines (names) you come across and read in every edition of the weekly Newspaper is Damian Avevor.

Have you thought for while how long you have read him and imagined the person behind the name? You perhaps have met this young man on countless occasions but never knew or thought he was the man behind all that you read.

For almost 20 years, Mr. Avevor has committed his life to a passion very few will commit to for more than 5 years- writing prolifically for the Church Media. We at Radio Angelus admire him especially his unique way of directing people including those of us at Radio Angelus how to write Church news. He is our mentor and motivator by all standards in the journalistic profession.

In the course of his duty, he has travelled to all the 19 Dioceses and a Vicariate to cover Church programmes including the Plenary Assembly of the Ghana Catholic Bishops’ Conference.

He has voluntarily contributed and still continues to contribute stories to the New People Magazine, an international Catholic Magazine of missionary awareness published in Kenya by the Comboni Missionaries but distributed in selected African countries including Ghana.

We believe occasionally you see the Church in Ghana featured in international media and you wonder how. Yes, all is through the voluntary contribution of Mr. Damian Avevor.

Over the years, he has voluntarily contributed stories about the Church Ghana to the international Catholic Media Organisations.

He is a twice award winner of Excellence in Journalism (2013 and 2016) from the International Christian Organisation of the Media (ICOM) headquartered in Switzerland.

With these accomplishments and zeal for Church Media work, one will certainly expect to see that the Church in Ghana does not lose this young energetic man. The question that comes to mind is: How well does the Church takes care of people who have dedicated their all to the course of the Church in various areas especially the Church Media like what Mr. Damian Avevor has done and continues to do?

As upcoming journalists at Radio Angelus, it marvels us at times, when we meet Mr. Avevor joyfully disembarking from a public transport especially to cover Church programmes including high profile ones in and out of Accra.

After the programmes, he is seen gently and quietly looking for a public transport back either to the office or home.

At times, we imagine how this man feels in his situation but his calm composure alone tells you he is not worried walking in the sun looking for public transport, all for the good of the Church. It is very common to see him covering two to three events in one weekend sometimes outside the capital.

Conventional wisdom holds that if only we pay workers enough, they’ll be productive. There may be more to it, though. Recent research hints there’s a link between employees’ happiness and their productivity at work.

A recent study by economists at the University of Warwick found that happiness led to a 12% spike in productivity, while unhappy workers proved 10% less productive. As the research team put it, “We find that human happiness has large and positive causal effects on productivity.”

Based on the above, it is important that as a Church, we pay attention to the happiness of individuals playing key roles in the Church as people like Mr. Avevor and some others are doing all in the name of the Church.

Let’s resource those who support the Church in diverse ways because their sacrifices cannot be measured with their remuneration. Let’s protect, motivate and encourage our own before we start losing them.

Mr. Avevor, we hope your special day will bring you lots of happiness, love, and fun. You deserve them a lot. Enjoy!