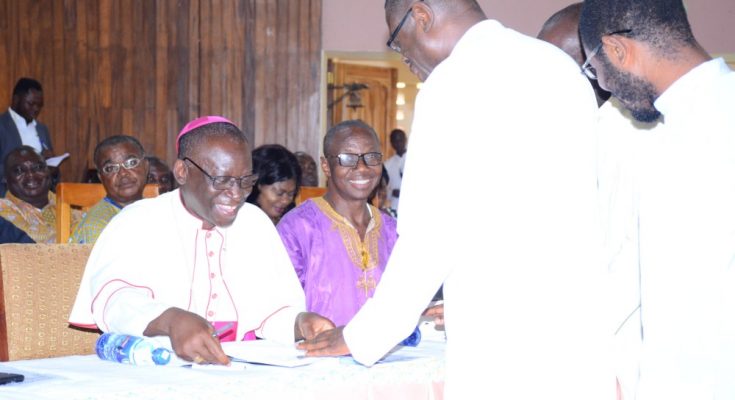 The Catholic Diocese of Sunyani on Saturday December 7, 2019 launched the third ten-year strategic mission plan birthed by the 2014 Diocesan Synod with focus on the social growth of the faithful in the Diocese at the Sacred Heart Cathedral- Sunyani.

The strategic policy would direct the faithful of the Diocese  at various levels on how to improve their social life rooting in income generation activities, education and other charitable deeds.

His Lordship, Most Rev. Matthew Kwasi Gyamfi, Chief Shepherd of the Diocese explains the policy will give the faithful the capacity to function in the areas of leadership, research and communication, pastoral care, finance and investment, agri-business and protection of the environment, women youth and children.

The Prelate noted that “the Catholic Diocese of Sunyani has always since its inception in 1973 been directed and driven by well structured pastoral and socio-economic plan”.

“The plan is a summary of the expectation of the faithful, Religious and Priests of the Diocese of Sunyani as well as the government and traditional leaders in our Diocese and political region”, he added.

According to Rev Fr. Simon Gyan Obeng, expediter of  the outlined strategic plan, the plan is also aimed at consolidating previous strategies employed by the Diocese and calls on all to support the course by donating their widow’s mite via  Mobile money numbers 0545897620 in the name of Catholic Diocese of Sunyani and 0245594407 in the name of Simon Gyan Obeng.

The plan is also expected to be launched at the various parish levels with focus on sensitizing the faithful about the strategic mission policy for the Diocese.

The launch was preceded by mass concelebrated by Most Rev Matthew Kwasi Gyamfi  with Priests, Religious, Leaders of the Civil Service, Political Leaders, the Diocesan Laity Council, Societal Leaders and the faithful gracing the occasion.