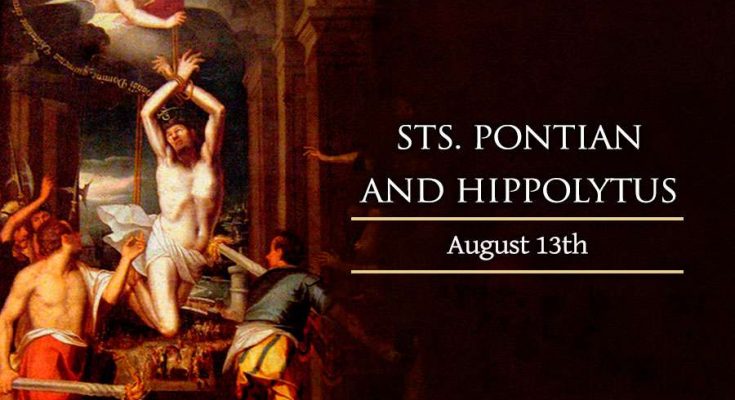 St. Pontian was a Roman citizen who succeeded St Urban in the Pontifical See in 230 AD. His pontificate lasted six years.

He presided over the Roman Synod which approved Origen’s expulsion and deposition of Pope Demetrius I of Alexandria around the year 230 to 231 AD. After the assassination of Emperor Alexander Severus in 235, he was exiled by the emperor Maximinus to the mines of Sardinia.

He resigned on 28th September, 235 AD to make way for a new Pope to be elected making him the first Pope to do so. He did so to allow an orderly transition in the Church of Rome. This action ended a schism that existed in the Church for about eighteen years.

He bore his sufferings and persecution patiently for Christ and attained the crown of martyrdom in the same year. He was beaten to death with sticks.

Exiled together with St Pontian was a priest named Hippolytus, one of the most important 3rd century theologians of the Roman Church. Born around 170 AD, he was already a priest and a personage of the note when Origen heard him preach at Rome in 202 AD.

During the first part of his life, he produced the Scriptural writings which constitute the best part of his works. He wrote the earliest known commentary on Scripture on the Book of Daniel and defended the Faith.

He also wrote the Apostolical Tradition which contains the earliest known ritual of ordinations.

After becoming involved in unfortunate controversies and even regarded as a kind of anti-Pope, Hippolytus returned to the fold and continued to defend the Church against all her enemies. Finally, he gave his life for the faith together with Christ’s Vicar on earth.

Happy feast day to us all. St Pontian and Hippolytus, pray for us. Amen

Share this
TAGSaint of the day Sts. Pontain and Hippolytus
Previous PostWitness to the Impostor Pope: an Immaculate Heart of Mary nun sees Pope Paul VI and impostor pope within minutes of each other Next PostSt. Jane Frances De Chantal, Foundress of the Order of the Visitation of Our Lady