Home Ghana News Witness to the Impostor Pope: an Immaculate Heart of Mary nun sees Pope Paul VI and impostor pope within minutes of each other 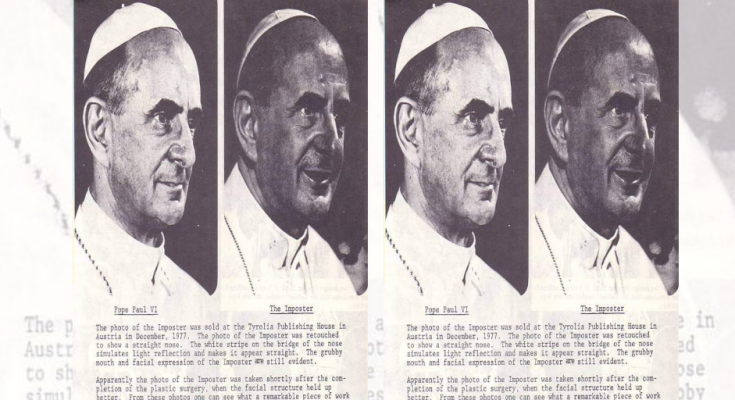 Witness to the Impostor Pope: an Immaculate Heart of Mary nun sees Pope Paul VI and impostor pope within minutes of each other

“This impostor, who has been given the image of the Pope, Our Vicar Paul VI, will pose and assume a role of compromise to the world. It is the plan of the evil ones about him… to discredit your Vicar by placing him in print and photographs in a compromising position to destroy him.” – Our Lady of the Roses, April 10, 1976

Photo: note the prominent birthmark between the eye and ear of the true Pope (on the left, 1973 photo) and conspicuously absent on the impostor (right, 1977 photo). This birthmark is clearly visible in the picture below, of Pope Paul VI meeting with Cardinal Mindszenty. Also notice the visible difference in the nose. Pope Paul had a longer, straighter, more pointed nose. The impostor had a shorter and rounder nose.

Transcription of a taped statement in October 1989 by Mrs. Anne De Lacey of Philadelphia, PA describing an experience of her sister, an Immaculate Heart nun, regarding the double for Pope Paul VI in Rome:

“My sister is an Immaculate Heart nun. And for the past ten years she has been stationed in the summertime down at Stone Harbor, their retreat house, which seems like an act of God, because she believes in Bayside. It used to be she would be sent to some parish up in New York or something to teach CCD in the summertime. She wouldn’t see any of the other nuns. But since she’s been down at the shore she gets to see almost all the two thousand nuns that come down there for their vacation and retreat.

“So she has spread the message of Bayside to a lot of them, and quite a few believe. She even gave it to the Mother Superior, and she used to ask her to read them to her when she would be driving home, you know. But she wrote and told the local nun that she couldn’t go to Bayside anymore. And she asked the Superior ‘If you want to read these and believe these, why won’t you let me go to Bayside?’ And she said, ‘Well, I can’t go above the Bishop of Brooklyn.’ The Mother Superior believed, but she couldn’t go above the Bishop.

“Well anyway, back to the other story. So she told a lot of the nuns about the ‘impostor pope’ and such. And this one time she was in a little room. And she always gets messages from me and gives them to the nuns that do believe. And she was telling them something about Bayside, and another nun who does not believe–she had heard about it, and said, ‘I don’t believe that!’–she popped into the room, and she has my sister’s book or something from the chapel. She said, ‘Well, you left this book in the chapel.’ She said, ‘What are you telling them now?’ So my sister told her, ‘You’d never believe what I’m telling them now.’ (Because she didn’t believe anything else.) She said, ‘What are you telling them?’ She said, ‘I’m telling them about the impostor pope.’ She said, ‘Oh, you mean two popes in Rome?’ She said, ‘Yes.’ And she said, ‘That I’ll believe.’

“Now this nun who will not believe anything else said, ‘I will believe that.’ So all the nuns said, ‘You will believe that one, well how come you don’t believe the rest? How can you believe that?’ She said, ‘Well, I was in Rome for the canonization of St. John Neumann.’ (cannonized June 19, 1977) And she said, ‘after the Mass was over–it was said by the real Pope Paul VI; he was old and feeble. And after the Mass he started coming down the steps from the altar, two priests on either side of him helping him, and they walked over to the side of St. Peter’s Square and went into a door on the side.’ This nun saw them going in, and then she saw other people going in that door where the Pope went. So she thought I’m going to go in there too. So she walked over, went in this room, and she saw the Pope right in there. But she didn’t have a little VIP badge on like all the other people did, so this guard came over and he said, ‘Sister,’ he said, ‘this is a reception for dignitaries from around the world.’ And he said, ‘You don’t have the right badge, so I’ll have to ask you to go out again.’

“Now she just saw him, Pope Paul VI, in that room. She walked back out on St. Peter’s Square. She looked up, because all the people were looking up at the balcony. She looked up and she saw another pope, blessing the people. And my sister said, ‘How come, if you saw this with your own eyes, the two popes, how come you don’t believe in Bayside?’ So–she’s not enlightened, she doesn’t have the grace–she said, ‘Oh, all important people have stand-ins.” So that was her explanation. She wouldn’t believe, even after seeing it. But all those nuns in that room heard her say she saw those two popes.”

Share this
Previous PostSaint of the day: Maximilian Kolbe Next PostSts. Pontain and Hippolytus, Martyrs