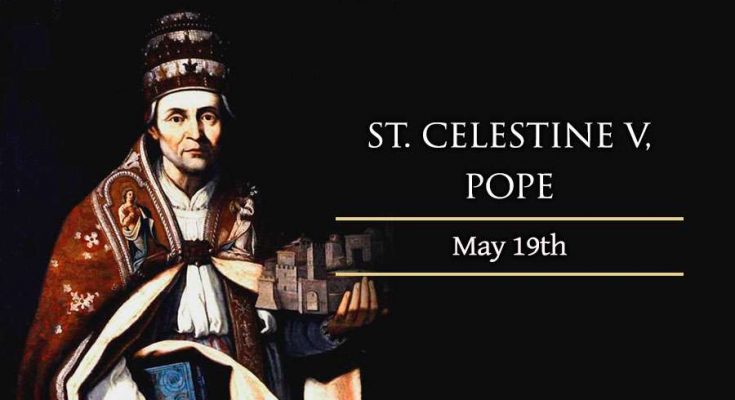 Pope Celestine V was born Pietro Angelerio to his parents Angelo Angelerio and Maria Leone in a town called Sant’Angelo Limosano in Sicily. After his father’s death, he began working in the fields. His mother Maria Leone, was very influencial in his spiritual development. Like all mothers, she envisioned a different future for her deeply beloved son than just becoming a farmer or shepherd like themselves.

From the time he was a child, he showed great intelligence and love for others. He became a Benedictine monk at Fairfoli in the diocese of Benevento when he just 17 years of age. He showed extraordinary disposition towards asceticism and solitude. In 1239, he retired to a solitary cavern on the mountain Morrone, hence his other name Peter Morrone.

He was Pope for five months from 5 July to 13 December 1294, and then resigned. He was also a monk and hermit who founded the order of the Celestines as a branch of the Benedictine order.

He was elected Pope in the Church’s last non-conclave Papal Election, ending a two-year impasse. Among the few edicts of his to remain in force was the confirmation of the right of the pope to abdicate. Nearly all of his other official acts were annulled by his successor, Boniface VIII. On 13 December 1294, a week after issuing the decree, Celestine resigned, stating his desire to return to his humble, pre-papal life. He was subsequently imprisoned by Boniface in the castle of Fumone in the Lazio region, in order to prevent his potential installation as antipope. He died in prison on 19 May 1296 at the age of 81.

Happy feast day to all Peter. St Pope Peter V, pray for us.

Saint of the day: St. John I, Pope and Martyr

Share this
TAGSaint of the day St. Peter Celestine V Pope
Previous Post140th Anniversary of SMA Mission in Ghana Marked in Low Key Amid COVID-19 Next PostSaint of the day: St. John I, Pope and Martyr