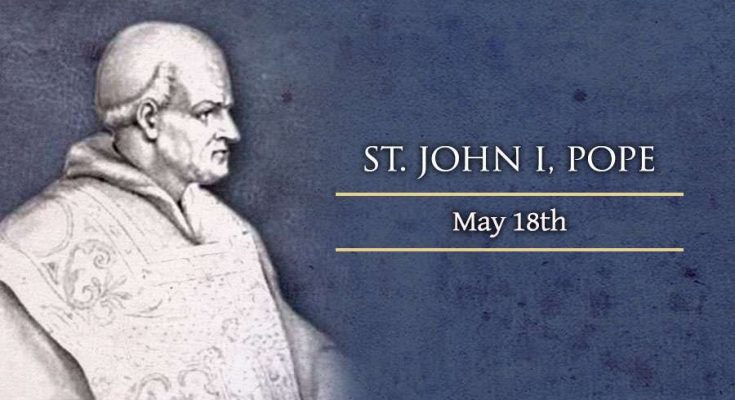 Saint of the day: St. John I, Pope and Martyr

A native of Tuscany in Italy, while he was still an archdeacon John was elected Pope upon the death of Pope Hormisdas in 523. At that time, the ruler of Italy was Theodoric the Goth who subscribed to the Arian brand of Christianity, but had tolerated and even favoured his Catholic subjects during the early part of his reign.

However, about the time of John’s accession to the Papacy, Theodoric’s policy underwent a drastic change as a result of two events, the severe edict against heretics enacted by the emperor Justin I who became the first Catholic on the Byzantine throne in fifteen years and the treasonable correspondence between ranking members of the Roman Senate and Constantinople.

Spurred on by the appeals of the Eastern Arians, Theodoric threatened to wage war against Justin but ultimately decided to negotiate with him through a delegation of five Bishops and four Senators. At it’s head, he named Pope John, much against the latter’s wishes. Pope John succeeded in persuading the emperor to mitigate his treatment of the Arians and thus avoid reprisals against the Catholics in Italy.

The Pope’s visit also brought about the reconciliation of both the Western and Eastern Churches which had been disturbed by a schism since 482 when Zeno’s Henoticon had been published. However, Theodoric had become more suspicious with each passing day. While waiting for the delegation to return, he executed the philosopher Boethius and his father- in – law, Symmachus on charges of treason.

When things got friendly between the Pope and the emperor, he thought they were plotting against him. Therefore as the delegations return to the capital , he imprisoned Pope John and the Pope died a short time later after as a result of the treatment he undured in prison.

Many a time people see our actions with blurred vision because they stay far away from us when we are doing things or taking action. Just as Pope John was killed upon misconception, may we learn to give people the benefits of doubt before we judge them. Amen

St. Pope John I, pray for us. Happy feast day to all John.

One thought on “Saint of the day: St. John I, Pope and Martyr”