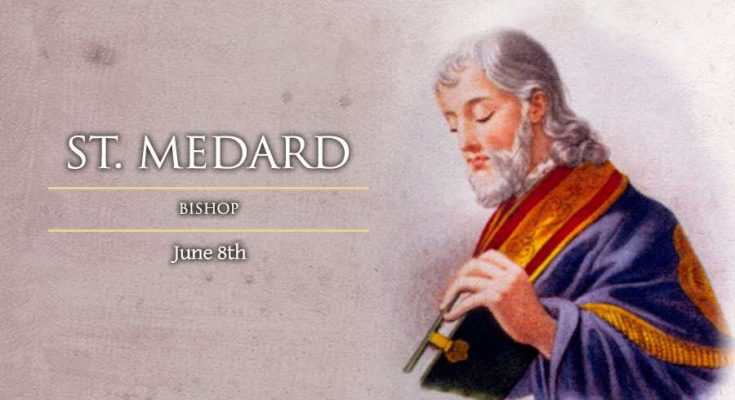 St. Medard or Merdadus was born at Salency in Picardy, about the year 457. Under the care of his pious parents, he made rapid strides in virtue, emanating particularly a great charity for the poor. At thirty-three years, he was ordained to the priesthood and became a bright ornament of that holy state, preaching to people by both words and deeds.

In 530, he became Bishop of Augusta Verumanduorum, being consecrated by St. Remigius. St. Remigius baptised King Clovis in 496.

Though he was then seventy-two years old, he redoubled his labours, extending his zeal wherever the honour of God seemed to require it. He bore persecutions in silence and with patience. Though he had the affliction of beholding his diocese ravaged by the Huns and Vandals, it gave him fresh opportunity to practice charity.

In 544, Radegondes, Queen of France, received the religious veil from his hands, and she was made a deaconess with the consent of her husband, King Clotaire, who doing penance for the sins of his youth, allowed himself to be guided by the counsels of St. Merdadus. The Saint died either in 545 or 561 and the whole kingdom lamented his death. A great Abbey was later built over his tomb at Soissons, France.

A pious state of life is the trademark of God’s grace and perfect example of Christlike virtues. May we all try to attain it in our lifetime. Amen

St. Merdadus, pray for us. Amen