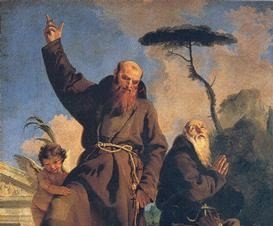 Saint of the day: St. Fidelis of Sigmaringen; Priest and Martyr

St. Fidelis was born in 1577 at Sigmaringen, a town in the principality of Hohenzollern. In 1612, he received Holy Orders and soon after entered the Capuchin Order at Fribourg, changing his baptismal name Mark, to Fidelis.

At the request of the Congregation of Propaganda, he undertook with eight Fathers of his Order, the mission among the Calvinist in the Canton of the Grisons in Switzerland, although his life was threatened. We shall learn more about the Calvinist later. In spite of opposition, he gained many converts. He spent much time at the foot of the alter or his crucifix, preparing himself for the martyrdom of which he had a premonition.

On April 24, 1622, he made his confession, celebrated Mass and preached at Grouch. At the end of his sermon, he seemed in ecstasy and foretold his death to several people present. From Grouch, he went to Sewis where he was fired upon by a Calvinist, though his life was spared.

On his way back to Gruch, the saint was attacked by an angry mob. He died praying for his attackers with the names of Jesus and Mary on his lips.

Would you have had the courage to go head up to the lion’s den? Let alone do and say things which it forbids in its kingdom? May the example of courage exemplified by St Fidelis help us to learn to forgive those who harm us for no good reason and to be grounded in love, and experience with him the power of Christ’s resurrection. Amen

St Fidelis, pray for us.

Share this
TAGSaint of the day
Previous PostOpinion: Kweku Labik recounts the uncertainties of the world amidst global uproar Next PostCovid-19: Pope Francis releases Ebook to sustain the Catholic Faith