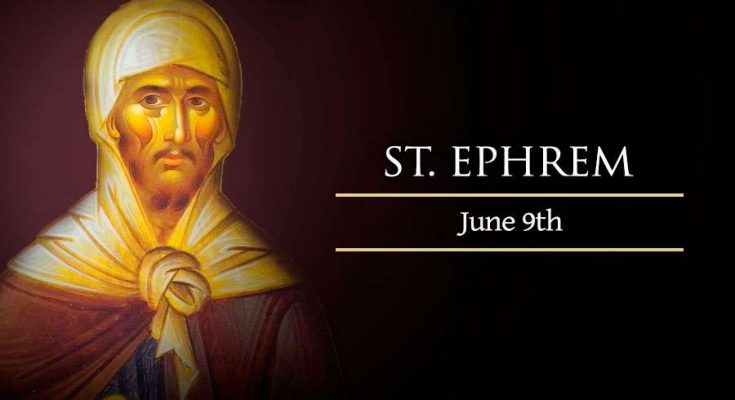 Saint of the day: St. Ephrem

Ephrem was born around the year 306 in the city of Nisibis, Mesopotamia in modern day Turkey.

Ephrem’s hymnody suggests that both his parents were part of the growing Christian community in the city, although later hagiographers wrote that his father was a pagan priest. Numerous languages were spoken in the Nisibis of Ephrem’s day, mostly dialects of Aramaic. The Christian community used the Syriac dialect. The culture included pagan religions, Judaism, and early Christian sects.

Jacob, the second bishop of Nisibis, was appointed in the year 308, and Ephrem grew up under his leadership of the community. Jacob of Nisibis is recorded as a signatory at the First Council of Nicea in 325. Ephrem was baptized as a youth and almost certainly became a son of the covenant, an unusual form of Syriac proto-monasticism.

Ephrem was later appointed as a teacher. He was then ordained as a deacon. He began to compose hymns and write biblical commentaries as part of his educational office. In his hymns, he sometimes referred to himself as a “herdsman”, to his Bishop, as the “shepherd”, and to his community as a ‘fold’.

He is also popularly credited as the founder of the School of Nisibis, which, in later centuries, became the centre of learning of the Syriac Orthodox Church.

In the year 337, Emperor Constantine I, who had legalised and promoted the practice of Christianity in the Roman Empire, died. Seizing on this opportunity, Shapur II of Persia began a series of attacks into Roman North Mesopotamia. Nisibis was besieged in 338, 346, and 350. During the first siege, Ephrem credited Bishop Jacob as defending the city with his prayers.

In the third siege, of 350, Shapur rerouted the River Mygdonius to undermine the walls of Nisibis. The Nisibenes quickly repaired the walls while the Persian elephant cavalry became bogged down in the wet ground. Ephrem celebrated what he saw as the miraculous salvation of the city in a hymn that portrayed Nisibis as being like Noah’s Ark, floating to safety on the flood.

One important physical link to Ephrem’s lifetime is the baptistery of Nisibis. The inscription tells that it was constructed under Bishop Vologeses in 359. In that year, Shapur attacked again. The cities around Nisibis were destroyed one by one, and their citizens killed or deported. Constantius II was unable to respond.

The campaign of Julian in 363 ended with his death in battle. His army elected Jovian as the new emperor, and to rescue his army, he was forced to surrender Nisibis to Persian and to permit the expulsion of the entire Christian population.

Ephrem, with the others, went first to Amida (Diyarbakır), eventually settling in Edessa, modern day Şanlıurfa in 363. In his late fifties, he applied himself to ministry in his new church and continued his work as a teacher, perhaps in the School of Edessa.

Edessa had always been at the heart of the Syriac-speaking world, and the city was full of rival philosophies and religions. Ephrem comments that orthodox Nicene Christians were simply called “Palutians” in Edessa, after a former bishop.

Arians, Marcionites, Manichees, Bardaisanites, and various Gnostic sects proclaimed themselves as the true church. In this confusion, Ephrem wrote a great number of hymns defending Nicene orthodoxy. A later Syriac writer, Jacob of Serug, wrote that Ephrem rehearsed all-female choirs to sing his hymns set to Syriac folk tunes in the forum of Edessa.

After a ten-year residency in Edessa, in his sixties, Ephrem succumbed to the plague as he ministered to its victims. The date for his death is 9 June 373.

Happy feast day to all Ephrem. St Ephrem, pray for us. Amen

Share this
TAGSaint of the day st. Ephrem
Previous PostSaint of the day: St. Getulius & Campanions, Martyrs Next PostOne minute for peace with Pope Francis

One thought on “Saint of the day: St. Ephrem”