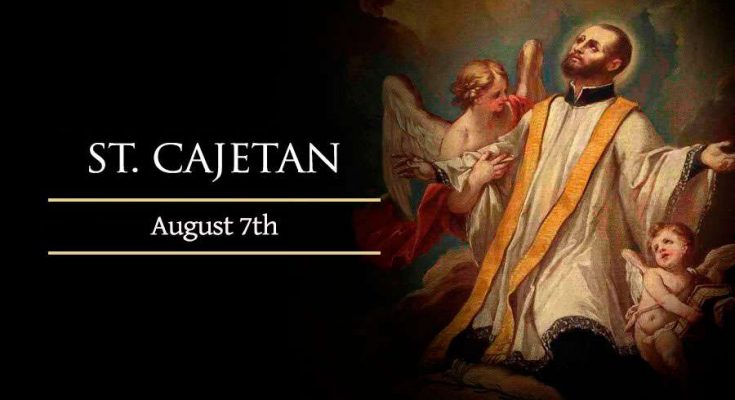 St. Cajetan was born in 1480. Under the care of his pious mother he grew up in the tenderest sentiments of virtue. Entering the ecclesiastical state, he went to Rome, hoping to lead an obscure life, but Pope Julius II forced upon him the office of protonotary opostolic. Upon the death of this Pope, he resigned and returned to Vicenza, his native city.

Both in Rome and Vicenza, the Saint devoted himself as a member of pious confraternities to promoting the glory of God and the salvation of souls. After a while he went to Venice and took up his abode in the hospital of that city. Having returned to Rome, he formed the idea of founding a society in which the members would endeavour to live like the Apostles of Old. Some of his companions were John Peter Caraffa, Pope Paul IV, Paul Consiglieri and Boniface de Colle. This began the Order of Regular Clerics, now known as Theatines. This Order was approved by Pope Clement VII in 1524.

During the sack of Rome by the Constable de Bourbon, St Cajetan was treated cruelly. In 1530, he succeeded Caraffa as General of the Order and filled the office for three years. In spite of his many occupations, he spent many hours a day in prayer and was often favoured with extraordinary ecstasies. Worn out by labours, he died at Naples on August 7, 1547. He was canonised by Pope Clement X.

May we not rest until the labour is completed. Amen

St. Cajetan, pray for us. Happy feast day to all Cajetan.