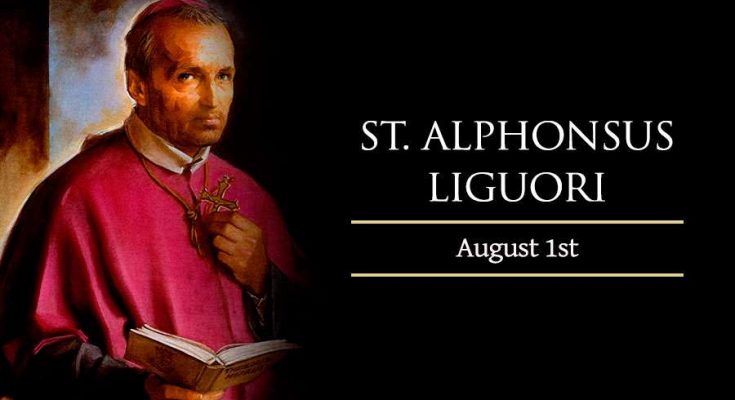 Saint of the day: St. Alphonsus Liguori, Doctor of the Church

Alphonsus was born near Naples, Italy, in 1696 of a noble Italian family. At nineteen he began to practice law and became one of the leading lawyers in Naples. He graduated with his Doctrate in both civil and Canon law at age seventeen. He never went to the law courts without first having attended Holy Mass and never lost a case for the ten years of his practice until one particular case. This sent him thinking. He then made up his mind to become a priest.. he was almost thirty years of age when he was ordained.

Alphonsus organised a community of priests in honour of the Most Holy Redeemer. Today, the Redemptorists preach parish missions all over the world.

The Pope commanded Alphonsus to become Bishop. During the thirteen years that he was Bishop, his health was never good. An attack of rheumatism left him a cripple for the rest of his life. His head was so badly bent that his chin pressed against his chest.

Alphonsus was permitted to leave his diocese but continued to preach Missions and write books. He made a vow never to waste even a moment of his time, and kept it for his entire ninety-one years. He had the gift of levitation and holy tears. He was also a mystic.

Alphonse had a great love for the Blessed Sacrament and Our Lady. He was given the title “Doctor of the Church”

This is a soul set on fire for God. Every talent or craft can be used to propagate the Good News to all. Let us also set our hearts ablaze for for God through the work of our hands.

Happy feast day to all Alphonse and all Redemptorists Priests. St Alphonse, pray for us. Amen