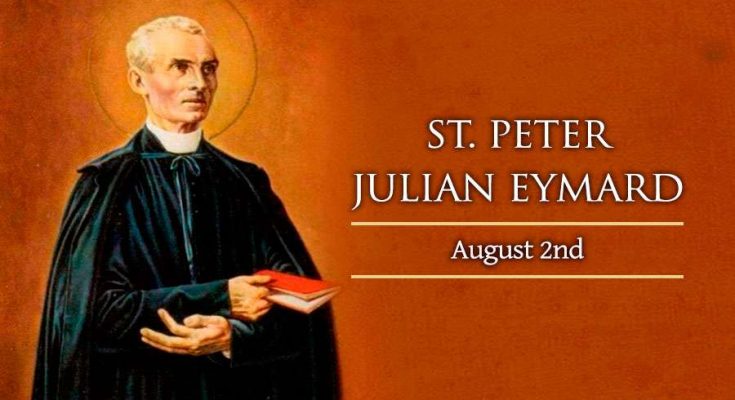 St. Peter Julian Eymard, whose feast the Church celebrates on August 2, helped many Catholics – both clergy and laypeople – to rediscover the importance of the Eucharist. He is also considered a pioneer in involving laypeople more actively in the life of the Church.

Peter Julian Eymard was born near Grenoble, France, in 1811. He had wanted to enter the priesthood as a youth, but his father forbade him because he wanted Peter Julian to take over the family business.

Finally, at the age of 18, he was permitted to join the Oblate novitiate. However, he became very ill, so ill that he was sent back home to die. However, Peter Julian made a remarkable recovery and entered the seminary once again after his father passed away. He was ordained to the diocesan priesthood in 1834 but later joined the Marists.

In 1851, he answered a call to establish a community of men dedicated to Eucharistic Adoration, called the Congregation of the Blessed Sacrament. Its mission was to promote the importance and significance of the Eucharist. The congregation also worked with the poor and helped them to prepare for first Communion. The founder died in 1868 and was canonized in 1962.

Share this
TAGSaint of the day St. Peter Julian Eymard
Previous PostPope at Angelus: Eucharist provides strength to care for others Next PostSaint of the day: St. Alphonsus Liguori, Doctor of the Church