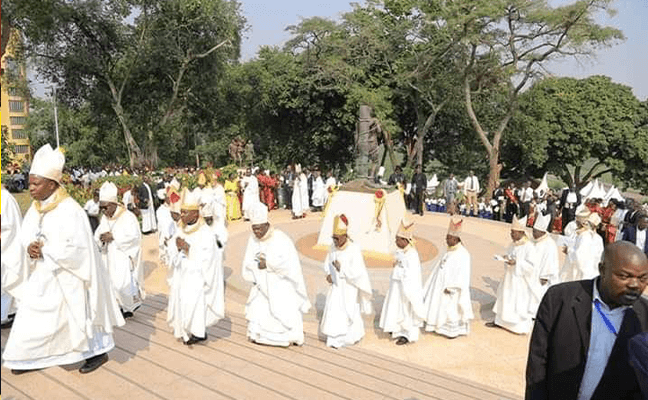 The 5oth anniversary General Assembly of  the Symposium of Episcopal Conferences of Africa and Madagascar (SECAM) has come to a close in Uganda.

The week long event came to an end in what could be described as a fitting closing Mass held on Sunday, July 28 2019 at the Martyrs of Uganda shrine.

The Mass is reported to have had over one million faithfuls in attendance. 9 cardinals from Africa and about 140 Bishops and priests numbering over 200 graced the occasion.

In an address to the church in Africa, the Bishops beckoned the family of God to be hopeful of what God is doing in their lives and called for special attention on the children and youth in the church as they were the present and future of SECAM. The bishops also prayed for peace, justice, progress and development and for prayers for Martyrs of Uganda.

The 18th Plenary Assembly and Golden Jubilee of the Symposium of Episcopal Conferences of Africa and Madagascar (SECAM) was held in Kampala, Uganda. The assembly opened on July 21, and came to an end on July 28. The Golden Jubilee celebration was under the theme, “Church-Family of God in Africa, Celebrate Your Jubilee! Proclaim Jesus Christ Your Saviour.”

Share this
TAGAFRICA Catholic Church SECAM
Previous PostUganda gets 3rd Minor Basilica Next PostEditorial: From a father to his beloved young people – Pt.2