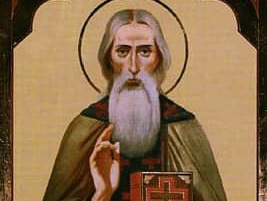 St. Pachomius was born around 292 in the the Upper Thebaid in Egypt. He was inducted into the Emperor’s army at the age of twenty. The great kindness of Christians at Thebes towards the soldiers became embedded in his mind and heart and this led to his conversion after he was discharged from army service.

He became a disciple of an achorite, Palemon after his baptism. Both Palemon and Pachomius lived a life of austerity and total dedication combined with manual labour and unceasing prayer, day and night. Later, he built a monastery on the banks of River Nile at Tabennisi.

By the time of his death in 346, he had built ten monasteries for men and two for women. There were seven thousand monks in his monasteries and his Order prevailed until the eleventh century.

He was the first monk to organise hermits into groups and write down a Rule for them. Both Sts. Basil and Benedict emulated him. Therefore as St Anthony the Abbot, also from the African continent is regarded as the one to start Monasticism, it was St. Pachomius who is regarded as the founder of Christian Monasticism in our modern times.

Ask yourself why some of our great Saints came from North Africa and yet, their places of birth now belong to other religious sects. We have much more to do and offer. We each have to try and keep their legacies alive and real. May their zeal for God for which we celebrate them keep us also alive for others to emulate.

St. Pachomius, pray for us.

Share this
TAGSaint of the day St. Pachomius
Previous PostWomen groups in Sunyani Diocese Support Media Outreach Next PostAuthor tells how children can benefit from COVID-19 with a piece dubbed “Growing Footsteps”