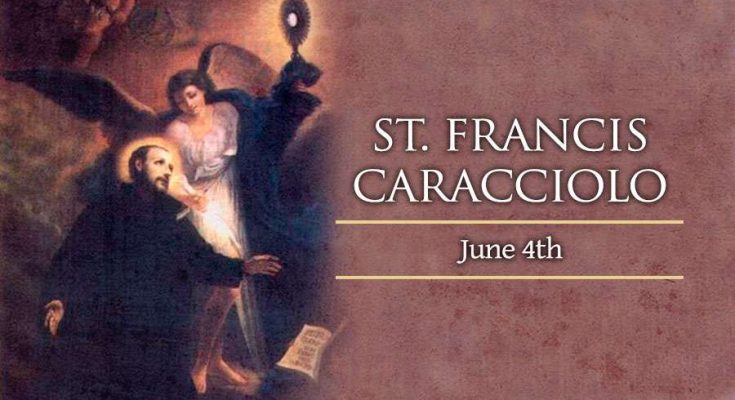 He therefore entered the priesthood at Naples, where he began to exercise his zeal, especially in assisting those condemned to die. Upon becoming a priest, the diseased skin varnished.

By a providential disposition, he joined John Augustine Adorno and Fabricius in founding the Order of the Regular Clerics Minors. Up to the time of his profession, he had borne the name of Ascanio, which he now changed for that of Francis, in honour of Francis of Assisi. Two years later, upon the death of Adorno, he became superior of the Order.

To extend his Order, he traveled three times to Spain, clad as a pilgrim and begging his bread along the way. On these journeys, he suffered great hardships but he had the satisfaction of founding several houses in Spain, aided by the liberality of King Philip II and his son Philip III, who succeeded him in 1598.

Such was the charity of the Saint that arriving in Rome, he took up his abode in a hospice of the poor and associated with a leper. He breathed his last at Agnone, in the house of the Oratory Fathers on June 4, 1608. He was canonised in 1807 by Pope Pius VII, 199 years after his death.

May we learn to never give up on ourselves and whatever good deeds we do shall live on after us. Let nothing stop us from doing the will of our Father. To serve God, even infirmities which otherwise may hinder us, varnish. Amen

Happy feast day to all Francis. St Francis, pray for us. Amen

Share this
TAGSaint of the day St. Francis Caracciolo
Previous PostLet's not tempt God - Archbishop Kwofie cautions Christians Next PostBishop Osei-Bonsu explains “how many Times a Priest can say Mass in a day”

One thought on “Saint of the day: St. Francis Caracciolo, Religious”