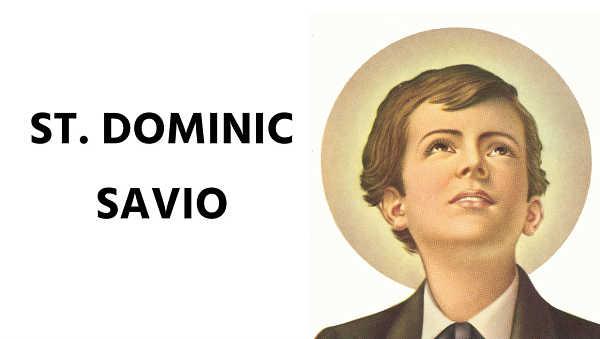 Saint of the day: St. Dominic Savio, Patron of children

Among the boys whom St. John Bosco helped, there was one whom he loved very much. His name was Dominic Savio. St. John Bosco even wrote the story of his life.

Dominic was born in Riva, Italy, in 1842. He learned to serve Mass when he was just five years old. At age twelve, he visited St. John Bosco and told him that he wanted to be a priest. They became good friends. As he grew up, Dominic entered the Oratory School, which was founded by St. John Bosco.

His schoolmates liked him because he was very kind and cheerful. He studied hard and loved to pray. But his health was poor and after just two years he had to return home.

Dominic always kept these rules, which he had written in a notebook on his First Communion Day :

When Dominic was dying, he said, “what beautiful things I see“! He was only fifteen years old.

They say children have the most beautiful of souls and we can testify to this very young beautiful soul. He said he will rather die than commit a sin. If we could all identify with his faith in Christ, we should not be afraid of anything, let alone death.

May His gentle spirit teach us to avoid the nearest sin and not contaminate our bodies against God. Amen

Happy feast day to all and Dominic.

Saint of the day: St. Angelo of Jerusalem, Martyr

Share this
TAGSaint of the day St. Dominic Savio
Previous PostPope at Audience: ‘We are all beggars before God’ Next PostSaint of the day: St. Angelo of Jerusalem, Martyr

One thought on “Saint of the day: St. Dominic Savio, Patron of children”