Home Ghana News Saint of the day: St. Anthony of Padua, Doctor of the Church, Patron of the Poor 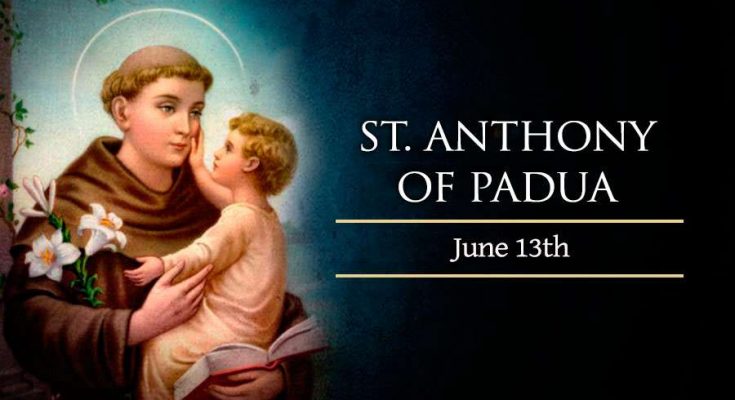 Saint of the day: St. Anthony of Padua, Doctor of the Church, Patron of the Poor

Anthony’s parents were very rich and wanted him to be a great nobleman. But he wanted to be poor for the sake of Jesus Christ, so he became a Franciscan.

Anthony was a great preacher. He was sent out as a missionary and preached in many cities in Italy and France. He brought many sinners back to God mostly by his good example.

One day, when Anthony was praying in his room, he was blessed with a vision of the Infant Jesus, putting his chubby baby arms around his neck and kissed Anthony. This wonderful favour was given him because he kept his soul free from even the smallest sin which we think it’s impossible. And also because he loved Jesus very much.

As Anthony was preaching one day at the market by the sea, a great miracle occurred. As Anthony preached, people refused to listen to him and rather laughed and mocked him. He then told the people that if they humans, created in the image of God but will not listen to His words, Anthony will preach to the fish in the sea.

Lo and behold, as he turned his head toward the sea, fish of different kinds and sizes appeared on the surface of the sea and as Anthony preached to them they nodded as if they understood what he was saying.

When the people saw what was happening, they changed their ways and repented.

On the appointed day, everybody in the town gathered at the square. A stack of hay, food for donkeys were put at one end and Anthony stood holding high a chalice of a consecrated host. The donkey as it was, had been starved for a week. As the donkey was led towards its food, it stopped turning, bent it’s two front legs with its head bowed toward Anthony, and the elevated chalice containing the host.

This is one of the greatest miracles recorded in the history of the Church. The monk later converted back to the Catholic faith after what he had witnessed that day.

When Anthony became ill, he went to a monastery outside of Padua, where he prepared for death.

Many miracles took place after his death and the miracles are still happening, that is why he called the “Wonder Worker”.

He was only thirty-six years old when he died. Thirty-two years after his death, his remains were exhumed and brought to Padua. On opening the coffin, it was discovered that the whole body had corrupted except his tongue, which was found red and fresh as it is in a living body.

Even animals know Christ’s worth, how much more you and I. May St Anthony, who is the Wonder Worker, open our hearts to see and experience the wonders of God. And may it reflect in our daily lives. Amen

Happy feast day to all Anthony. St. Anthony, pray for us.

Share this
TAGPadua Saint of the day St. Anthony
Previous PostPope's message for World Day of Poor: Prayer inseparable from solidarity with poor Next PostThe story of two brothers ordained Catholic priests on the same day