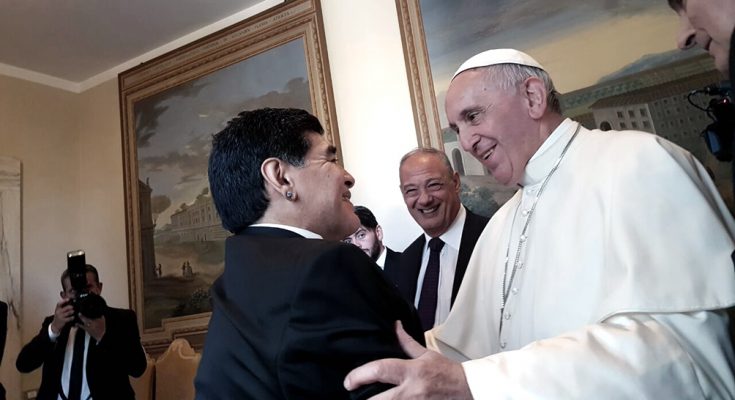 Diego Maradona died on Wednesday at his home in Tigre, Argentina, from suspected chronic heart failure.

At the untimely age of just sixty, he leaves an unfillable void in the world of soccer, and the world is mourning a sporting genius the likes of which we will never see again.

Of humble beginnings and tough battles

Winning the World Cup in 1986, kissing it, cradling it and holding it aloft in Mexico’s giant Azteca Stadium was the zenith of Diego Maradona’s career and the fitting summit of his life’s work. His reason for being, doing, achieving and triumphing.

Born in grinding poverty, Diego lifted himself up by his bootstraps, mesmerizing opponents and earning the respect of sports fans the world over.

The ball seemed to be glued to his golden left foot. At his best – and his best was supreme – and he had no equal.

But like other geniuses, his craft and brilliance was confined to one specific area, and he struggled hard in other aspects of his life, besieged with problems related to drugs and alcohol, which he never sought to excuse or hide, fighting them with all his might and making them public.

But some battles cannot be won. Rather, it’s the courageous way they are fought which makes the feat so memorable and humbling.

In the quarter finals of that legendary 1986 World Cup, he infuriated the England Team, with his “Hand of God” goal, yet minutes later left them in awe and wonderment, with the greatest goal of all time, carving a swathe through the English midfield and defense, beating six English players and slotting in the goal past the despairing arms of goalkeeper Peter Shilton.

Only Diego Armado Maradona could have scored that goal. It has never been equaled, let alone bettered since. It was his signature flourish of sheer magnificence.

Gary Lineker, who was a star in his own right and a member of that England team, paid tribute after Maradona’s death, saying: “Diego was by some distance the best player of my generation and arguably the greatest of all time.”

Pele, who rivals Diego for the top spot said: “I have lost a great friend and the world has lost a legend. One day I hope we can play football together in the sky.”

Argentina’s President Alberto Fernandez said: “You took us to the top of the world, and you made us immensely happy. You were the greatest of them all.”  The Argentine Football Federation beautifully and simply stated: “You will always be in our hearts.” Leonel Messi said: “Diego leaves us, but he doesn’t leave us… because he’s eternal.”

Diego met Pope Francis – who is a fan – on a number of occasions, most notably on 4 September 2014 at the Casa Santa Marta, prior to a charity match. Diego presented the Pope with the famous number 10 jersey with “Francisco” emblazed upon it.

They met again a year later, in connection to the Pope’s Scholas Occurrents worldwide movement for young people, who are the hope of our world.

Pope Francis had been praying for Diego during his recent health problems and surgery to remove a brain clot, and now in the hour of his death.

The Director of the Holy See Press Office, Matteo Bruni, said Wednesday evening that the Pope “recalls with affection the times [he and Maradona] met in recent years, and remembers him in prayer, as he has done in recent days after learning of his poor health.”

Tears the world over

No player will ever again capture the imagination like Diego Maradona, making hearts pound like crazy. He used his God-given gifts to their very fullest.

Share this
Previous PostLove is mystical root of believer’s life - Pope at Audience Next PostSaint of the day: St. Leonard of Port Maurice