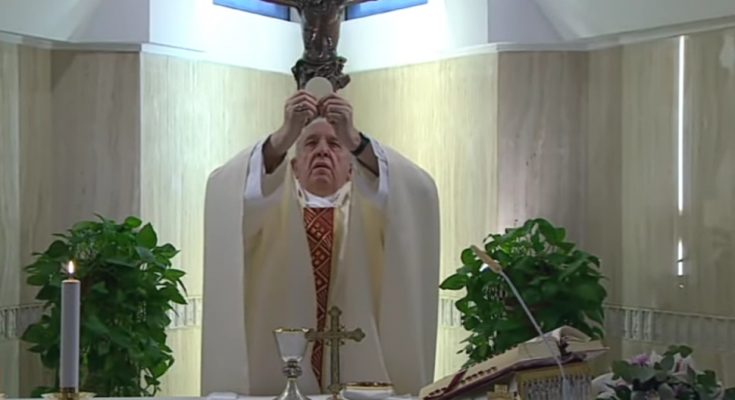 Pope Francis prayed Saturday for mayors, governors, presidents, and legislators at a time when many government leaders are making decisions about whether to ease or extend coronavirus restrictions.

“Let us pray for authorities who have the responsibility to take care of their people in these moments of crisis,” Pope Francis said before offering Mass on May 2.

“For the Lord will help them and give them strength because their work is not easy,” he added.

Speaking from the chapel of his Vatican City residence, Casa Santa Marta, the pope said that it is important for leaders to remain united in a time of crisis because “unity is superior to conflict.”

Pope Francis recommended reading the Gospel and the Acts of the Apostles to understand how to live in a moment of crisis, noting that the early Church faced persecutions and difficulties that “put believers in crisis.”

“We Christians need to learn how to manage both moments of peace and moments of crisis,” the pope said in his homily.

“May the Lord send us the Holy Spirit to know how to resist temptations in times of crisis,” he said.

The pope pointed to the passage in chapter six of the Gospel of John in which some of Christ’s disciples murmured among themselves after Jesus declared: “I am the bread of life.”

“At that time many of his disciples returned to their former way of life and no longer accompanied him. Jesus decides to question the apostles. Jesus then said to the Twelve, ‘Do you also want to leave?’ Make a decision,” Pope Francis said.

Pope Francis said that Peter’s response with a confession of faith is an example of faith and trust amid a crisis.

Peter responded: “Master, to whom shall we go? You have the words of eternal life.”

“This helps all of us to live through moments of crisis,” the pope explained. “This pandemic is also a time of social crisis.”

“In times of crisis, be very firm in the conviction of faith,” Pope Francis said.

Share this
TAGcoronavirus Pope Francis Vatican City
Previous PostMurdered Nigerian seminarian was killed for announcing gospel, killer says Next PostBreaking: Ghana gets new Apostolic Nuncio, here's everything you need to know about him