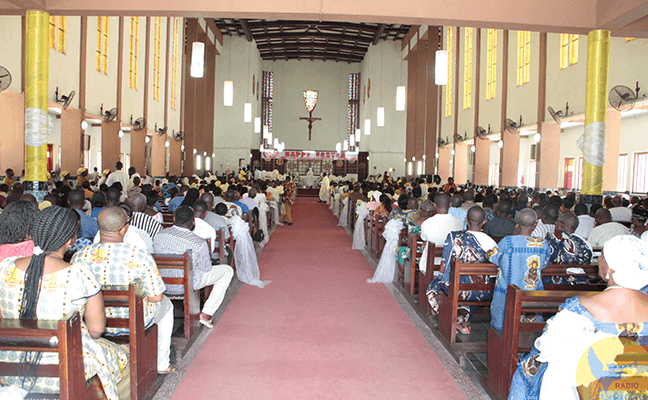 You’ve almost certainly seen it. It’s a problem at virtually all Catholic parishes I’ve been to: some Catholics will attend Mass, receive communion… and then immediately leave Mass before it’s finished.

The Mass is the “source and summit of the Christian life.” (CCC 1324) It is the re-presentation of the one holy sacrifice of Our Lord Jesus Christ.The Eucharist is Jesus Christ himself, really, truly, and substantially present. Mass is the most important thing we do every week!

Especially relevant, the Mass is one thing. It is one big long prayer. Yes, there are parts, but they all go together, and “going to Mass” means going to all of it. We’re not called to simply “get communion” and leave. Thanking Jesus after receiving communion, the final prayers, and the dismissal are all essential parts of Mass!

“But what if I have a really good reason to leave early?” Of course, if you have a good reason you’re leaving early, you can leave early. Maybe an emergency just came up.

But that’s not why the vast majority of Catholics who leave Mass early are doing it. They are leaving early because it’s become their habit. They get the Eucharist, they think they’re done, and they can beat the traffic if they leave early. They’ve never been corrected or told otherwise… so why would they stop?

We need to stop tolerating this kind of spiritual mediocrity. Mass is important, and if you want to be Catholic the Church requires us to attend Mass every Sunday (or Saturday evening) and Holy Day of Obligation. This means, barring a really good reason, being there on time and staying until the very end. If you aren’t willing to do this, then you simply aren’t a practicing Catholic (in which case, repent!).

“But I was taught that we only have to be there from the Gospel reading through communion (or some other similar rule)?” Canonist Ed Peters has a great explanation on this very topic. He basically says that all such rules are local customs or rules of thumb, but aren’t in canon law. In reality, we’re obligated to attend Mass, which means all of Mass, unless we have a good reason otherwise.

The bottom line is this: when we go to Mass, that means staying until the very end. If you’ve been in the habit of leaving early, let’s intentionally stop that and stay for the whole thing. Because God is worth it!