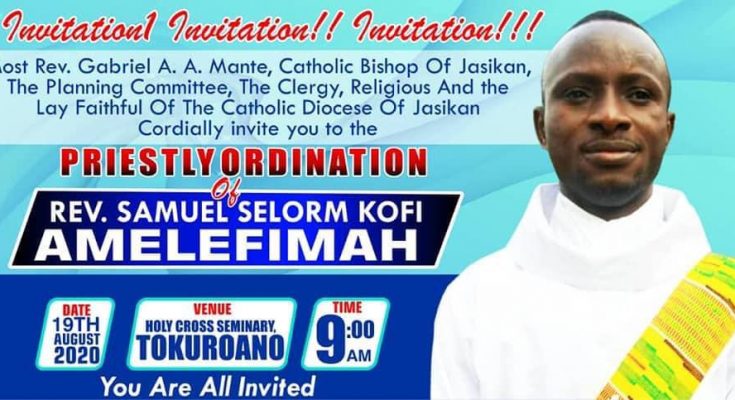 Most Rev. Gabriel A. A Mante, Bishop of the Jasikan Diocese will on Wednesday, August 19, 2020 ordain Rev. Samuel Selorm Kofi Amelefimah to Priesthood.

The ceremony to be held at the Holy Cross Minor Seminary will see the Diocese’s only candidate Rev. Samuel Selorm Kofi Amelefimah being ordained to Priesthood.

As part of activities gear towards tomorrow’s celebration, the Most Rev. Gabriel A. A. Mante met with the parents of the Candidate for a “Pre Ordination Interaction”.

In an exclusive interview with Radio Angelus, Rev. Fr. Robert Anabila, Vocations Director and Youth Chaplain of the Jasikan Diocese describes the candidate as an affable character who has earned embarked on his spiritual journey with undivided attention.

He says “Rev. Samuel distinguishes himself from his brothers by his hard work. He has the spirit of perseverance and his has kept him throughout his journey”.

He had his basic Education at St. Joseph Pre. school, R/C primary and JHS. After successful completion in 2006 he entered into Kpando Senior High School and completed in 2009.

He went to Lolobi Senior High Seminary in the 2010/11 for a prep philosophical course. He then preceded to St. Paul Major Seminary, for his spiritual year and Philosophical studies from 2011-2014/2015 academic year.

He finally entered in St. Peter Regional Seminary for histheological studies for the period of 2015-2020 bringing his seminary formation to a successful end.

He was ordained a deacon on the 15th of January 2020 at Bowri Kyrahehe.