Home Ghana News When A Priest Refuses To Witness To Christ He Has Broken His Vows – Fr. Emmanuel Salifu 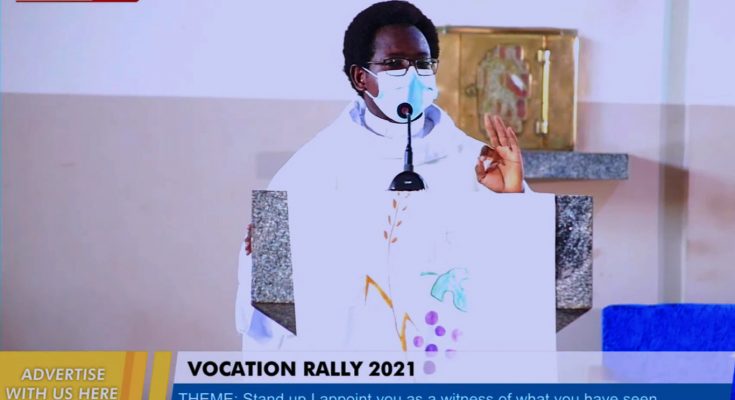 The Priest in Charge of St. Joseph the Worker Catholic Church, Weja, Rev. Fr Emmanuel Salifu has said the first time a priest breaks his vows is when he refuses to witness to the body of Christ. According to him the call of God to priesthood or religious life is mainly and always a call to witness or testify to the light.

He made the statement when gave he the homily in a Mass presided over by the Vicar General of the Accra Archdiocese, Very Rev. John Louis on Saturday, 17 April as part of the 2021 Vocations Rally celebration at the St. Charles Lwanga Parish, Abeka. This year’s celebration, the first virtual edition, was on the theme, “Stand up, I appoint you as a witness of what you have seen”, Act 26:16.

In his homily, he identified four principles that align with the call of God. According to him, the call to every vocation is personal. He explained that when God calls anyone He calls them by name and establishes a personal relationship with them. He added that even within the same congregation, God calls different people to different missions because He knows what each person can contribute to building the body of Christ. He called this a call within a call.

Fr. Salifu also stated that whenever one is called to any vocation they must open up to God and His call. He admonished people not to resist the call of God to any vocation noting that the consequences could be very uncomfortable and painful.

Based on the third principle, Fr. Salifu encouraged young people in the church to be of courage and respond to God’s call. He conceded he was one of those who entertained fear and timidity in responding to the call to the priesthood. He confessed that in his theology days it took courage for him to be able to wear the cassock from home to church for Mass. Hitherto, he would only put it on at the sacristy.

The man of God said the last principle was that every call of God is a call to witness. According to him, Apostle Paul was called to witness to his experience and personal encounter with Christ as a gentile.

The Vocations Director of the Catholic Archdiocese of Accra, Rev. Fr. Januarius Akpabli remarked in his opening address that it is only through prayer that one could bear fruits in any vocation that they find themselves.

Fr. Januarius charged all parishes, churches, and vocations committees to launch the Vocations Week and mark it with various relevant activities from 18th to 25 April 2021. All activities should be directed at promoting vocations, especially the priesthood.

Vocations Rally and the vocations week are annual celebrations used to inform, educate and encourage all those who feel called to respond to the call to serve God as priests or religious.

Participants at the rally were representatives of some priestly and religious congregations who took turns to make presentations and to invite young people to join them. Also in attendance were the youth leadership of the Accra Archdiocese, the Kaneshie, and Osu deaneries.