Home Ghana News Want to know the history behind the Feast of the Epiphany? 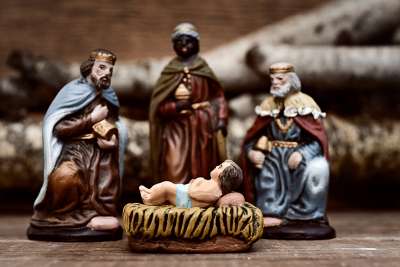 Want to know the history behind the Feast of the Epiphany?

While the hustle and bustle of Christmas ends for many people on Dec. 26, throughout Christian history Christmas lasts for twelve days – all the way until Jan. 6.

This feast marking the end of Christmas is called “Epiphany.”

In the Latin Rite of the Catholic Church, Epiphany celebrates the revelation that Jesus was the Son of God. It focuses primarily on this revelation to the Three Wise Men, but also in his baptism in the Jordan and at the wedding at Cana.

In the Eastern rites of the Catholic Church, Theophany – as Epiphany is known in the East – commemorates the manifestation of Jesus’ divinity at his Baptism in the River Jordan.

While the traditional date for the feast is Jan. 6, in the United States the celebration of Epiphany is moved to the next Sunday, overlapping with the rest of the Western Church’s celebration of the Baptism of Christ.

However, the meaning of the feast goes deeper than just the bringing of presents or the end of Christmas, says Fr. Hezekias Carnazzo, a Melkite Catholic priest and founding executive director of the Virginia-based Institute of Catholic Culture.

“Our human nature is blinded because of sin and we’re unable to see as God sees,” he told CNA. “God reveals to us the revelation of what’s going on.”

“The Feast of Epiphany, or the Feast of Theophany, is a very, very early feast,” said Fr. Carnazzo. “It predates the celebration of Christmas on the 25th.”

In the early Church, Christians, particularly those in the East, celebrated the advent of Christ on Jan. 6 by commemorating Nativity, Visitation of the Magi, Baptism of Christ and the Wedding of Cana all in one feast of the Epiphany. By the fourth century, both Christmas and Epiphany had been set as separate feasts in some dioceses. At the Council of Tours in 567, the Church set both Christmas day and Epiphany as feast days on the Dec. 25 and Jan. 6, respectively, and named the twelve days between the feasts as the Christmas season.

Over time, the Western Church separated the remaining feasts into their own celebrations, leaving the celebration of the Epiphany to commemorate primarily the Visitation of the Magi to see the newborn Christ on Jan. 6. Meanwhile, the Eastern Churches’ celebration of Theophany celebrates Christ’s baptism and is one of the holiest feast days of the liturgical calendar.

The celebration of the visitation of the Magi – whom the Bible describes as learned wise men from the East – has developed its own distinct traditions throughout the Roman Church.

Other cultural traditions have also arisen around the feast. Dr. Matthew Bunson, EWTN Senior Contributor, told CNA about the “rich cultural traditions” in Spain, France, Ireland and elsewhere that form an integral part of the Christmas season for those cultures.

In Italy, La Befana brings sweets and presents to children not on Christmas, but on Epiphany. Children in many parts of Latin America, the Philippines, Portugal, and Spain also receive their presents on “Three Kings Day.”

Meanwhile, in Ireland, Catholics celebrate “Women’s Christmas” – where women rest from housework and cleaning and celebrate together with a special meal. Epiphany in Poland is marked by taking chalk – along with gold, incense and amber – to be blessed at Mass. Back at home, families will inscribe the first part of the year, followed by the letters, “K+M+B+” and then the last numbers of the year on top of every door in the house.

The letters, Bunson explained, stand for the names traditionally given to the wise men – Casper, Melchior and Balthazar – as well as for the Latin phrase “Christus mansionem benedicat,” or, “Christ, bless this house.”

In nearly every part of the world, Catholics celebrate Epiphany with a Kings Cake: a sweet cake that sometimes contains an object like a figurine or a lone nut. In some locations lucky recipient of this prize either gets special treatment for the day, or they must then hold a party at the close of the traditional Epiphany season on Feb. 2.

These celebrations, Bunson said, point to the family-centered nature of the feast day and of its original celebration with the Holy Family. The traditions also point to what is known – and what is still mysterious – about the Magi, who were the first gentiles to encounter Christ. While the Bible remains silent about the wise men’s actual names, as well as how many of them there were, we do know that they were clever, wealthy, and most importantly, brave.

“They were willing to take the risk in order to go searching for the truth, in what they discerned was a monumental event,” he said, adding that the Magi can still be a powerful example.

Lastly, Bunson pointed to the gifts the wise men brought – frankincense, myrrh and gold – as gifts that point not only to Christ’s divinity and his revelation to the Magi as the King of Kings, but also to his crucifixion. In giving herbs traditionally used for burial, these gifts, he said, bring a theological “shadow, a sense of anticipation of what is to come.”

Fr. Hezekias Carnazzo explained to CNA the significance of the feast of the Theophany – and of Christ’s Baptism more broadly – within the Eastern Catholic churches.

In the feast of the Baptism of the Lord, he continued, there is special divine significance.

With this feast day, the pastor explained, “God has come to reclaim us for himself.” Because of original sin, he continued, humanity has inherited “a human nature which has been dislocated from its source of life.”

Sin also effected parts of creation such as water have also been separated from their purpose and connection to God’s plan for life, Fr. Carrazzo said, because its original purpose is not just to sustain our bodies, but our souls as well.

“With the fall, however, it has been dislocated from its source of life, it is under the dominion of death- it doesn’t have eternal life anymore. So God comes to take it to himself.”

“What Jesus did was to take our human nature and do with it what we could not do – which is, to walk it out of death, and that’s exactly what He did with His baptism.” As it is so linked to the destruction of death and reclaiming of life, the Feast of Theophany is also very closely linked to the Crucifixion – an attribute that is reflected in Eastern iconography of both events as well.

The feast of the Theophany celebrates not only Christ’s conquering of sin through baptism, but also God’s revelation of Christ as his Son and the beginning of Christ’s ministry. “The baptism of the Lord, just like the Nativity, is not just a historical event: it’s a revelation,” Fr. Carrazzo said.

To mark the day, Eastern Catholics begin celebrations with Divine Liturgy at the Church, which includes a blessing of the waters in the baptistry. After the water is blessed, the faithful drink the water, and bring bottles of water to bring back to their homes for use and not only physical but spiritual healing, he explained. Many parishes hold feasts after Liturgy is over. In many Middle Eastern cultures, people also fry and eat awamat – dough that is fried until it floats, and then is covered in honey.

During the Theophany season, priests also try to visit each home in the parish to bless the house with Holy Water that was blessed at Theophany. Fr. Carrazzo invited all Roman Catholics to come and become familiar, “to be part of a family” and join in celebrating Eastern Catholic traditions.

This article was originally published on CNA Jan. 6, 2017