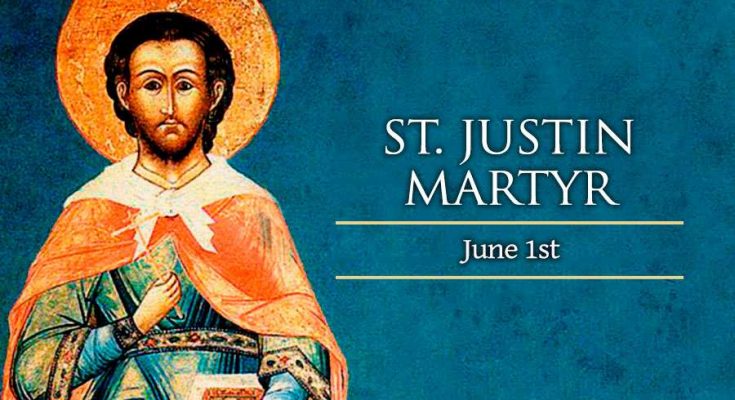 Saint of the day: St. Justin, Martyr, Patron of Lecturers

Born at Nablus, ancient Shechem in Palestine, around the year 100 AD, Justin came from a pagan family. At the age of thirty-three, after years of studying the various systems of philosophy, he became converted to Christianity by way of Platonism.

After this, his whole life was devoted to the propagation and defence of the Faith in Asia Minor and Rome. Though he retained the garb of a philosopher, he is the most important Christian Apologist of the 2nd century and the first of whom we posses written works. These are the two Apologies, to the Emperor Anthoninus and the Roman State, and the dialogue demonstrating it’s truth to the Jew Trypho.

In the year 165, while bearing witness to the faith in Rome, he was denounced as a Christian, most likely at the instigation of a cynic philosopher whom he had outshone in a public debate. Arrested and ordered to sacrifice to the gods, he replied “no right – minded man forsakes truth for falsehood”. The six others who were with him remained steadfast with him and they all attained the palm of martyrdom.

May our acquisition of knowledge lead us to the wisdom of God. Amen

Happy feast day to all Justin. St Justin pray for us.

Share this
TAGSaint of the day St. Justin
Previous Post[Opinion] The Gift Of The Holy Spirit: My Perspective  Next PostOpinion: Reopening of schools; What every parent should know