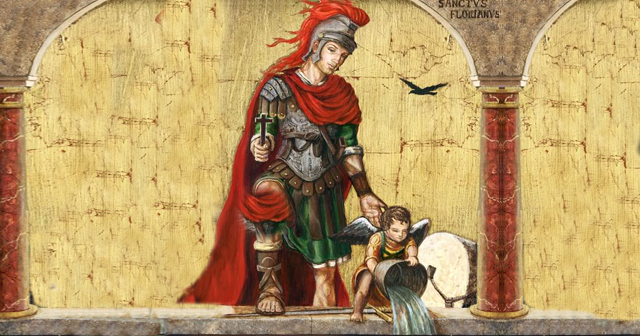 Saint of the day: St. Florian, Martyr, Patron of Poland

Florian was an officer of the Roman army, serving in Austria in the third century. Accordingly, he held a high position in the administration of the town of Noricum.

During the persecution of Diocletian in the 304, when the Roman soldiers were rounding up Christians at Lorch, Florian also surrendered to the soldiers of the governor Aquilinus and confessed his Christianity. As a result, he was scourged just like his Saviour, skinned alive and then tossed into the Enns River with a stone tied around his neck. Later his body was retrieved and buried at an Augustinian monastery near Lorch.

In 1138, after Florian’s body was taken to Rome, Pope Lucius III gave part of Florian’s relics to King Casimir of Poland and to the Bishop of Cracow. St Florian today is considered to be the Patron of Poland and Upper Austria.

St. Florian, pray for us. Amen

One thought on “Saint of the day: St. Florian, Martyr, Patron of Poland”