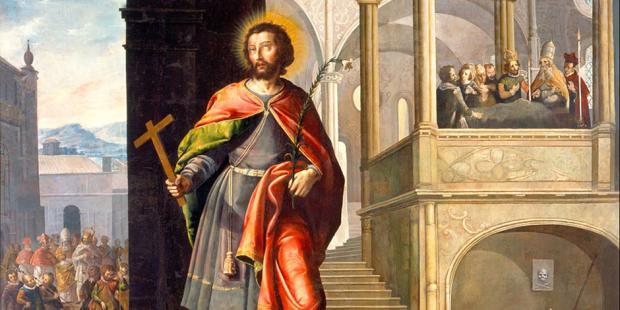 St. Alexius was the only son of a wealthy senator of Rome, Euphemian, and his wife, Aglaë. He was born and educated in that capitol in the fifth century. From the charitable example of his parents he developed a compassionate attitude at an early age. Fearing that earthly honors might draw his heart from noble objects, he decided to renounce the advantages of his birth and retire from the world.

Having in compliance with the will of his parents, married a wealthy girl, Marina, he on the very day of the wedding parted from her with her consent. In disguise, he traveled to Syria, embraced extreme poverty, and resided in a hut adjoining a church dedicated to the Mother of God at Edessa. Here he lived for seventeen years until an image of our Lady spoke and revealed his holiness to the people, calling him “the Man of God”. Thereupon he fled back to his home.

His father did not recognize him, but received him as a beggar and gave him employment, allotting a corner under the staircase as his quarters. For another seventeen years he thus lived unknown in his father’s house, bearing the ill treatment of other servants in patience and silence. After his death a writing was found upon him, giving his name and family and an account of his life and his true identity.

For some, the world is the best thing that ever happened to them. But for others, knowing Jesus is the greatest thing that ever happened to them. The saints knew they were on a journey in this life and therefore focused their attention on the ultimate goal, Jesus. It is not bad or evil to enjoy this world but if you cannot guarantee your life will be safe at it’s end, it is better to not have enjoyed it at all.

May St. Alexius help us to know what we are and where we are going so that at the end of the day, we will also assemble in communion with the Angels and Saints in the presence of God. Amen

St. Alexius, pray for us. Happy feast day to all Alexius, Alex and Lexis.

Share this
TAGSaint of the day St. Alexius
Previous Post[OPINION] What Covid-19 Taught Me As A Priest Next PostBishop warns new priests against overconfidence