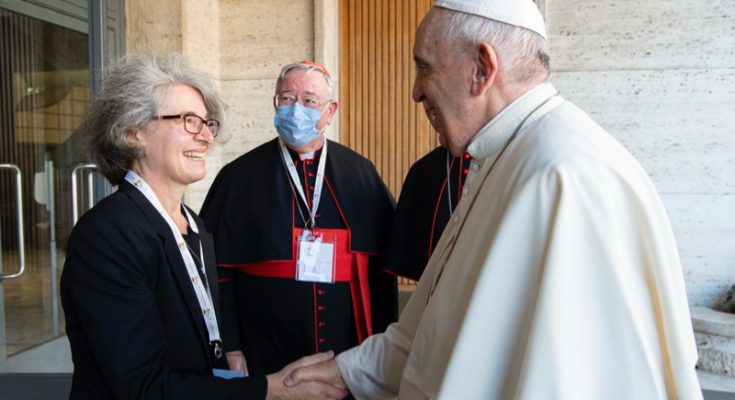 The appointment of Sister Raffaella Petrini follows that of Sister Nathalie Becquart, pictured, and Sister Alessandra Smerilli to senior roles. 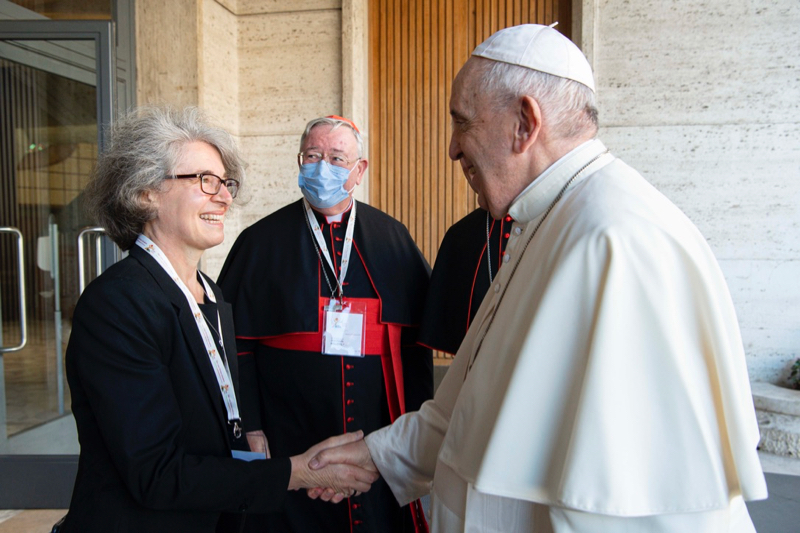 Earlier, in February, the Pope appointed Sister Nathalie Becquart as the first female under-secretary at the Synod of Bishops’ office
Paul Haring/CNS
Pope Francis has appointed the first female secretary-general of Vatican City State.
He has chosen a religious sister as secretary-general of the body which runs Vatican City State.

Sister Raffaella Petrini, 52, is the first woman to be appointed as the number two official at the Vatican City State administration, a position that has traditionally been held by a bishop. She becomes the highest-ranking woman official in the Vatican.

Sister Rafaella’s role gives her a pivotal role in the governance of the city-state which includes the Vatican’s museums, police, department for health, post office and pharmacy. The city state’s health directorate took a leading role in responding to the Covid-19 pandemic inside the Vatican, including a vaccination campaign and the introduction of vaccine passes.

Born in Rome, the new secretary-general is a member of the Franciscan Sisters of the Eucharist. She is an expert in Catholic social teaching, with a particular focus on health care and since 2005 has worked as an official at the Congregation for the Evangelisation of Peoples. She has lectured in social sciences at the Angelicum (the Pontifical University of Saint Thomas Aquinas) in Rome and at the International Institute for the Pastoral Theology of Health Care, known as the Camillianum.

Vatican City, which covers 108 acres, generates significant revenues for the Holy See through visitors to the museums and the Sistine Chapel. It has a population of around 800 and has several thousand employees. While the ultimate superior is the Pope, the president of the city-state governorate is Bishop Fernando Vérgez Alzaga, who was appointed on 1 October 2021 having previously served as the secretary-general.

The appointment of Sr Rafaella is the latest attempt by Francis to diversify the largely all-male leadership in the Vatican. Throughout his pontificate he has made slow, yet steady, progress, although the last twelve months have seen him step up efforts.

In February, the Pope appointed Sister Nathalie Becquart as the first female under-secretary at the Synod of Bishops’ office, also a post normally held by a bishop, and which opens the way for her to vote at a future synod of bishops gatherings.

Several months later, he chose Sister Alessandra Smerilli as the interim secretary at the Holy See’s Dicastery for Promoting Integral Human Development, which made her the first woman to hold a number two position in the Roman Curia. The Salesian sister is also a member of the governing council of the Vatican City State administration.

Over the years Francis’ appointments include the first female manager at the Secretariat of State, Dr Francesca Di Giovanni; women under-secretaries at the Department for Laity, Family and Life; Barbara Jatta, the first woman director of the Vatican Museums and Sister Nuria Calduch-Benages, the first female secretary of the Pontifical Biblical Commission. In August 2020, Francis chose six women to the board overseeing Holy See finances.

The Pope has also chosen the first women to oversee and advise Vatican departments, including the Congregation for the Doctrine of the Faith, the Synod of Bishops’ office and the congregation dedicated to religious orders. Francis appointed the first female deputy director of the Holy See Press Office and over the summer he added a number of women scientists, including three Nobel laureates, to the Pontifical Academy of Sciences.

One thought on “Pope appoints first female secretary-general at Vatican”