Home Ghana News You have targets to meet; don’t give up – Archbishop Kwofie urges students 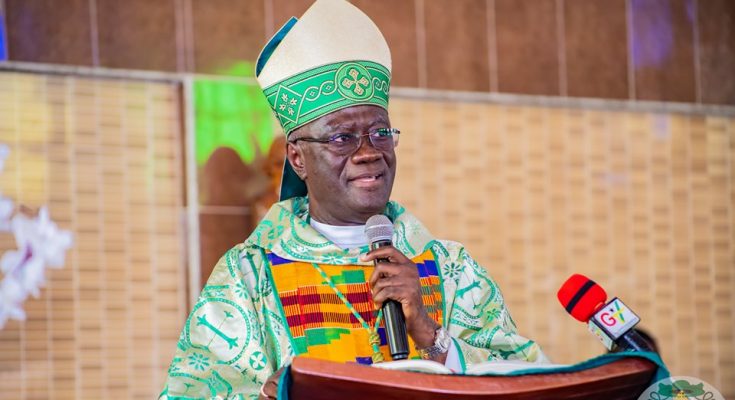 You have targets to meet; don’t give up – Archbishop Kwofie urges students

The Metropolitan Archbishop of Accra, Most Rev. John Bonaventure Kwofie has thrown words of encouragement at students urging them to fight for the best in their academic  pursuits.

Archbishop Kwofie in his homily at the 50th anniversary climax of St John the Baptist Parish, Odorkor-Tipper on Sunday October 20, 2019 said students must endeavour to put in more efforts towards their studies.

‘Students, you have targets to meet, don’t give up in your studies. Don’t be lazy in your studies, fight and fight on. Success is given to the one who perseveres’ he said.

He further urged Christians to be faithful in all aspects of their lives as faithfulness calls for endurance.

‘I want you to look at the word Be Faithful. In this word Be Faithful, we are told to endure. To be faithful tells us what it means to follow the Lord: that is the only way  to be a servant of the Lord. The Lord takes us through the most difficult routes to bring us victory. The crown is meant for those who fight to the end’ he said.

Prior to the anniversary climax, the parish has put together a lot of events to mark its 50 years of existence. Key among these programs were the mega float, homecoming and the three-continuous weeks business fair. For December, plans are underway for a dinner and awards night.

Share this
TAGCatholic Archdiocese of Accra st john the baptist
Previous PostCentenary celebration of Apostleship of the Sea launched Next PostFr. Emmanuel Salifu writes: Celibacy; a gift or a problem?