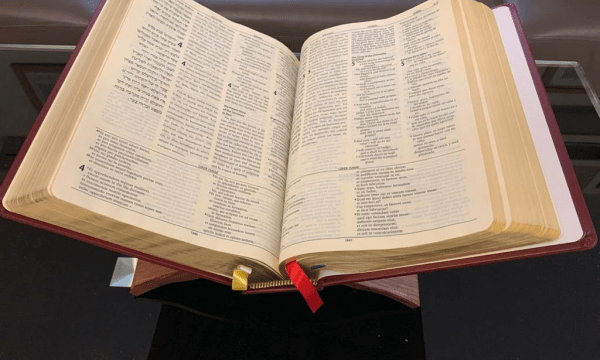 Word of God Sunday to be marked on January 26

The Sunday of the Word of God will be celebrated for the first time on January 26  2020.  This is an initiative that Pope Francis entrusts to the whole Church so that “the Christian community will focus on the great value that the Word of God has in its existence. daily ”(Aperuit illis 2).

On 30 September, on the expiry of the 1600 years of the death of Saint Jerome, a great scholar of Sacred Scripture and translator in Latin from the original texts, the Pope made public his Apostolic Letter Aperuit illis with which he instituted this Sunday.

This was made known to the Press by H.E. Archbishop Rino Fisichella, President of the Pontifical Council for the Promotion of the New Evangelization at a Press Conference on Friday 17th of January 2019.

The coincidence with that date was equivalent to a gesture of great attention to the vast world gathered around biblical studies and biblical exegesis, which this year will give rise to a diverse series of events with which to celebrate the figure and the work of St. Jerome.

Archbishop Fisichella added that at the conclusion of the Jubilee of Mercy, in the Apostolic Letter Misericordia et misera, Pope Francis had already made an allusion to this perspective when he wrote: “It would be appropriate that every community, on a Sunday of the liturgical year, could renew its commitment to diffusion, knowledge and deepening of Sacred Scripture a Sunday entirely dedicated to the Word of God, to understand the inexhaustible the wealth that comes from that constant dialogue of God with his people.

“There will be created to enrich this moment with initiatives that stimulate believers to be living instruments of transmission of the Word “(Mm 7). Indeed, following the Second Vatican Council with Dei Verbum, and the Synod on the Word of God (2008) with the Apostolic Exhortation Verbum Domini, many different pastoral initiatives aimed at placing knowledge at the centre have multiplied, the diffusion, reflection and study of Sacred Scripture.” Said the Archbishop

He made it known that in Brazil, 150,000 Bible grants will be distributed free of charge. In Argentina, the month of the Bible will be organized in September. In Colombia, the Word of God is proposed to children with the play of puppets, making them smile and reflect. In Venezuela, despite the crisis, a diploma was created to take care of the biblical animation of all pastoral care.

International Bible Day is celebrated in the United States in November; the American Bible Society, for its part, proposes the spread of the Bible, with particular attention to areas of poverty, making it accessible in different languages and in different formats. Archbishop Fisichella  said

He added that in the youth field, the initiative announced in the Year of the Bible celebration and involving young people is interesting. Together Generation, in Washington in June, will be a mix of music, testimonies, and readings.

In the Philippines, the Interior Minister announced the week of January 20-26 as the national week of the Bible, urging those who are able to do so to extend the week to the entire month. Also in the Philippines for ten years the National Bible Quiz initiative has been able to involve the whole nation, under the sign of a biblical competition that involves all the Catholic schools in the country.

In Spain a magazine was born, Biblia viva, for the biblical animation of pastoral care. In Italy the Italian Biblical Festival is organized, now in its sixteenth edition, which involves seven dioceses and wants to bring the Word into the world of culture.

The President of the Pontifical Council for the Promotion of the New Evangelization said it is for this reason that the Pope with his Letter Aperuit illis intended “to respond to many requests that have come from the people of God so that the Sunday of the Word can be celebrated in the unity of purpose.

He added that this Sunday of the Word of God is therefore placed as a pastoral initiative of New Evangelization, with the aim of reviving the responsibility that believers have in the knowledge of Sacred Scripture and in keeping it alive through a work of permanent transmission and understanding, capable to give meaning to the life of the Church in the various conditions in which she finds herself.

Even the great ecumenical value that this Sunday has cannot go unnoticed. Pope Francis has established that it should always be celebrated on the third Sunday of ordinary time of the liturgical year which, as can be seen, falls in the vicinity of the day of dialogue between Jews and Catholics and the week of prayer for Christian unity.

Obviously, it is not a mere temporal coincidence, but a choice that intends to mark a further step in the ecumenical dialogue, placing the Word of God in the very heart of the commitment that Christians are called to make daily. Archbishop Fisichella said.