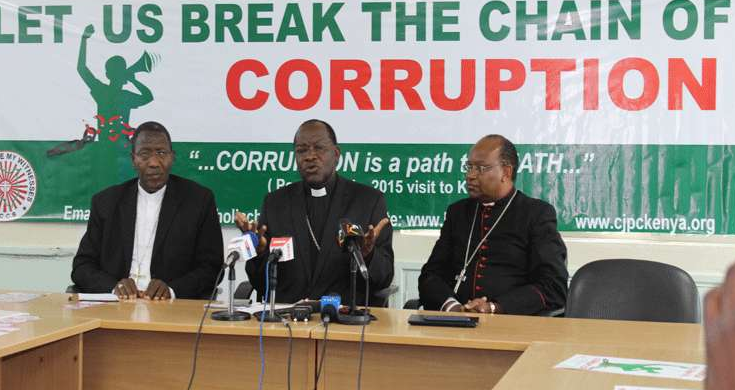 On the eve of the Catholic Church’s launch of a six-month campaign against corruption in Kenya, some Bishops drawn from the Kenya Conference of Catholic Bishops (KCCB) have explained why the body of Bishops has taken the bold step to fight the vice, making particular reference to the message of Pope Francis during his maiden visit to Africa four years ago and the factor of the human conscience.

“We are doing this within the context of the invitation by Pope Francis who visited us in 2015 and perhaps the toughest critic of corruption on Kenyan soil,” Archbishop Anthony Muheria told journalists at a press conference Friday in Nairobi.

“He (Pope Francis) at the same time made an appeal especially to the young people to overcome and not be swallowed by this evil,” Archbishop Muheria recalled.

The prelate who spoke on behalf of explained that it is in the context of the Holy Father’s invitation that they (Bishops) decided to take up the challenge now as they focus on the “awakening of the baptismal calling and baptismal consequences of being a Christian that are to fight evil and to stand for what is right.”

“We feel invited by the universal Church that we need to look back and somehow reawaken, re-strengthen and renew what we have received and made commitment as baptized Christians and from there awaken the general conscience of all those people who believe in God,” Archbishop Muheria who is member of Opus Dei said at the press conference attended by ACI Africa.

On his part, Archbishop Martin Kivuva of Kenya’s Mombasa Archdiocese identified the human conscience as being vitally important in the fight against corruption in in the East African country saying, “If our conscience is dead, then we do not see any evil in doing anything wrong.”

“That is why we need to reawaken the conscience of every Kenyan such that if they want to give or receive a bribe, the awakened conscience makes them reject the bribe,” Archbishop Kivuva said.

KCCB has planned to launch a special campaign against corruption under the slogan “Breaking the Chains of Corruption” at the National Prayer Day through gestures and symbols to be enacted during the Saturday, October 5 event.

“Michael the Archangel fought Satan from heaven, so we want to be armed and our weapon is prayer in Ephesians 6 – we need to put on the armor of God, firmness of faith, conscience and also the belt that is righteousness and the enthusiasm to do so,” Bishop Alfred Rotich told journalists during the Friday press conference ahead of the event.

The Bishops have described corruption in Kenya as “the sin of a rotten heart that rots all human relations”, a “rejection of truth and honesty” and “the rejection of God’s laws.” 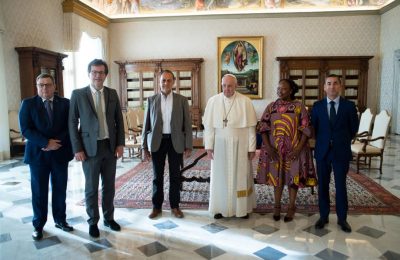