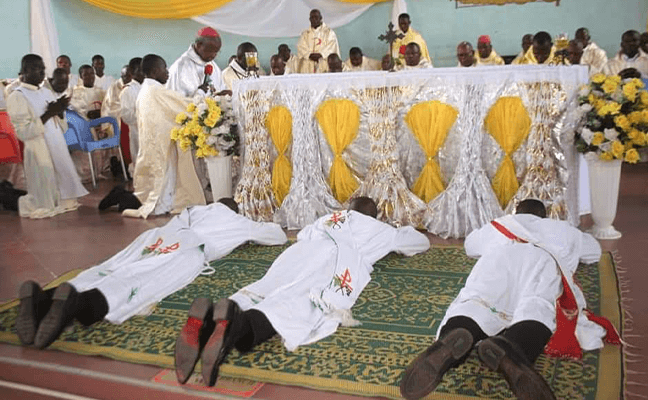 Most Rev. Richard Kuuia Baawobr, Catholic Bishop of the Wa Diocese,  called on the  newly ordained priests of the Wa Diocese to be men of integrity in the discharge of their priestly duties to the people of God. This he said, would make them successful in their ministry. The Bishop made the call during the sermon in an ordination ceremony that took place at the St. Andrews Cathedral on Saturday, 3rd August.

The three newly ordained priests were Rev. Fr. Naa Gordon, Rev. Fr. Duorinaa Tierong and Rev. Fr. Isaac Saakom. The three have successful in their formation and were found to be worthy for ordination into the priesthood. To this end they were duly ordained today. And the readings that were chosen were used to encourage on their new journey as priests of the Catholic Church.

He explained that as priests they needed to embrace the qualities of a leader as stated in St. Pauls letter to Timothy in 1Timothy3:2. For them to live those qualities, they needed to live lives devoid the abuse of women, misuse of wine or alcohol and money. They needed to see treat women as their mothers and Sisters and not to take advantage of them. They also needed to be moderate in the use of use alcohol as Paul encourage Timothy with respect to the qualities that a leader should have. They also needed to be accountable to monies that people give to them. Noting that it would encourage people to give, if they are seen to be shown high sense of accountability.

The Bishop urged them to announce the good news of the gospel. They were to also denounce the ills in society and to build up the society as well. These are the things he indicated should mark their ministry.
Finally urged them to adopt lives of simplicity, solidarity and service. He explained that they needed to live simple lives that would allow them to live with others. Also, they to work with others in solidarity and not just as individuals. Finally, they needed to know that they have been called to serve and not to be served.

They were called to be mindful of the evangelical virtues of Chastity, Obedience and Poverty. With these words and many more, he admonished the newly ordained priests to be people who can smell their sheep in the words of Pope Francis. They needed to be available to lead the people of God, to Teach them and to Sanctify them.

It needs to be recalled that the rite of ordination is one of the elaborate celebrations in the catholic that has series of processes. After the homily, in the Liturgy of Ordination there was Litany of Supplication during which the candidates laid down on the floor face down as a sign of their submission to the will of God and their desire to serve the Church. The Litany of Saints was sung as the candidates laid prostrate.

There was the period of laying on of Hands and the Prayer of Ordination. Also investiture with Stole and Chasuble was followed with the Anointing of Hands. There was the Presentation of Bread and Wine, Kiss of Peace after which the Liturgy of Eucharist was done.

The Ordination ceremony was attended by several thousands of Catholics of all walks of life. Concelebrating with the Bishop were the Bishop Emeritus, Most Rev. Paul Bamile, who himself was marking his 51st anniversary celebration as a priest. There were also hundreds of priests concelebrating with the Bishop. In assistance were deacons, seminarians and the religious. It was a ceremony that was characterised by signs and gestures as part of the rite of ordination.

Other personalities who graced the occasion were the Upper West regional Minister, Dr Hafiz Bin Salih, Prof. Edmund Delle, the Security services, the Media among others. The celebration was characterised with wild jubilations as people sang and praised God for all he had done. After the entire ceremony, people took time to congratulate the newly ordained priests and took pictures with them. 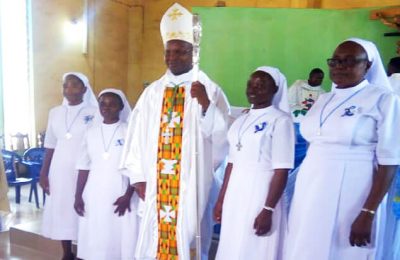