Home Ghana News The Story Behind Our Lady Of Guadeloupe 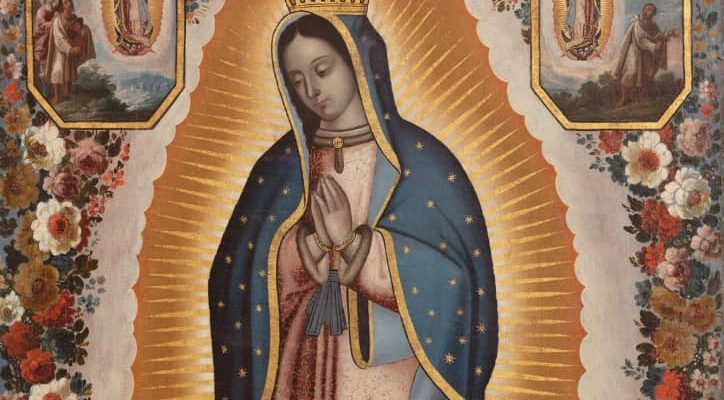 The Story Behind Our Lady Of Guadeloupe

A 57 year old newly native Mexican convert to Catholicism makes his way to Mass in the early morning twilight of December 9, 1531. He is a peasant, a simple farmer and laborer, and he has no education. Born under Aztec rule, he is a convert to Catholicism, and each step he takes this morning is a step into history.

Then suddenly the morning quiet is broken by a strange music that he later described as the beautiful sound of birds. Diverting his path to investigate the sound, Juan Diego comes face to face with a radiant apparition of the Virgin Mary. He had just encountered the Virgin Mary on Tepeyac Hill, the site of a former Aztec Temple dedicated to their goddess Tonantzin. Juan’s wife had died two years earlier, and he lived with his uncle, scratching his living from the earth as a humble peasant farmer. Why should this unlearned, man be chosen by Our Lady to carry a message to the world?

Juan Diego dazzled by the incredible beauty and miraculous nature of Our Lady’s appearance, She appears as a native princess to him, and her words sound more beautiful than the sweetest music ever made.

Our Lady calms the startled traveler, and assures him of who she was. She instructs Juan Diego to visit his bishop and ask that a temple be built on the site of her appearance, so that she will have a place to hear petitions and to heal the suffering of the Mexican people. “Now go and put forth your best effort,” Our Lady instructs.

Visibly shaken, Juan Diego went to the Bishop who was initially very skeptical of his account. What did this peasant truly want?

The Bishop patiently listens to Juan Diego’s accounts and let him go. The humble farmer had failed or so he thought.

Juan Diego began to doubt himself. He returned to Tepeyac Hill where he hoped for some conformation of what he had experienced. Indeed, Our Lady does not disappoint, for she appeared again, as radiant as before and Juan Diego tells Our Lady what she already knew, that the Bishop did not believe him. She instructed him to return the next morning and ask again.

This time the Bishop is beside himself. Why did this peasant insist on telling this story? How would he know if the peasant was lying or perhaps insane? At their second meeting, the Bishop asked for a sign. Juan Diego made a promise he won’t keep, saying he will return the very next morning with a sign from Our Lady.

But that evening, Juan Diego returned home to find his uncle, Juan Bernadino, who was 68 years old, and suddenly, terribly ill. The illness was known to the people there. It brought the burning fever so hot, almost always fatal. Juan Diego could not leave his uncle’s bedside to keep his pledge to the Bishop. He spent two days with his uncle, trying to save him. When it became apparent his uncle was about to die, he left to find a priest who could prepare him for death.

Frightened and saddened, Juan Diego set off in a great hurry, time was running out, and Juan Diego was afraid his uncle would die without his last confession. On the road, Our Lady appears for a third time at the same spot. Upset and afraid, Juan explained himself. Our Lady replied , “Am I not your mother? … Are you not in the crossing of my arms?” she asked.

Shamed by the admonishment, but boldened by Our Lady’s presence, Juan Diego asks for the sign he promised the Bishop. He knew he was wrong to doubt Our Lady but he needed a sign. Juan Diego was then instructed to climb to the top of Tepeyac Hill where he will find flowers. He was to pick the flowers there, which were unlike any he had seen before, and he was to keep them hidden in his tilma until he reached the Bishop. A tilma is a rough edged hard cloth made the indegeneou Indians at the time.

Juan Diego was skeptical again. It’s December, what flowers could grow on the summit of the hill in this cold?

Nevertheless, he obeyed and at the top of the hill, he finds a great number of flowering roses which he picked and hastily gathered into his cloak.

For the third time, Juan Diego was ushered in to see the Bishop. The skeptical cleric had waited for two days to see what sign Our Lady had for him. Remember that in the Catholic Church, we see before we make judgement. Juan opened his tilma, letting the roses cascade to the floor. But more than the roses, both men were astonished to see what was painted on his humble tilma, it was an exquisite image of Our Lady. Wow!

In the image, She stands as She appeared, a native princess with high cheekbones. Her head is bowed and Her hands are folded in prayer to God. On Her blue cloak, the stars are arranged as they appeared in the morning darkness at the hour of Her first apparition.

Under Her feet, is a great crescent moon, a symbol of the old Aztec religion. The message is clear, she is more powerful than the Aztec gods, yet she herself is not God.

At the same time, Our Lady was appearing to Juan Diego, and directing him to cut the flowers on Tepeyac Hill, she also appeared to his uncle, Juan Bernadino who believed he was about to die. As soon as she appeared, the fever stopped and Juan Bernadino became well again. She told Juan Bernardino that she wanted to be known as “SANTA MARIA, DE GUADALUPE.”

Our Lady of Guadalupe did not appear again, for her mission was complete. The temple was built and remains there today, in what is now a suburb of Mexico City. Juan Diego’s tilma, woven from cactus fibers, with a shelf-life of just 30 years at best, remains miraculously preserved till now.

The symbolism of Our Lady’s dress is obvious to over eight million Native Mexicans, even though they all speak different languages. She is brighter than the sun, more powerful than any Aztec god, yet she is not a god herself, and she prays to one greater than her. Her gown is adorned with stars in the correct position as in the night sky, and the gold fringe of her cloak mirrors the surrounding countryside. Millions of natives converted at the news of what happened. Millions more made pilgrimages over the next five centuries to see the miraculous tilma, and to honor Our Lady of Guadalupe. Great miracles continue to occur, even today.

On October 12, 1945, Pope Pius XII, decreed Our Lady of Guadalupe to be “Patroness of all the Americas.” Her feast day is December 12, and it is a Holy Day of Obligation in Mexico.

Our Lady of Guadalupe had this to say to Juan Diego:

“Know for certain, least of My sons, that I am the Perfect and Perpetual Virgin Mary, Mother of the True God through whom everything lives, the Lord of all things near and far, the Master of heaven and earth. It is My earnest wish that a temple be built here in My honor. Here, I will demonstrate, I will exhibit, I will give all My love, My compassion, My help and My protection to the people. I am your merciful Mother, the merciful Mother of all of you who live united in this land, and of all mankind, of all those who love Me, of those who cry to Me, of those who seek Me, of those who have confidence in Me. Here, I will hear their weeping, their sorrow, and will remedy and alleviate all their multiple sufferings, necessities and misfortunes.”