Home World News The Story Behind Mary Undoer of Knots 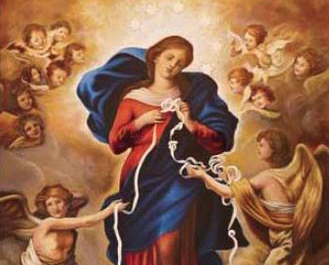 The Story Behind Mary Undoer of Knots

Mary, Untier of Knots or Mary, Undoer of Knots is the name of a Marian devotion. The painting by Johann Georg Melchior Schmidtner, of around 1700, is in the Catholic pilgrimage church of ST. PETER AM PERLACH, otherwise known as the Perlach Church, in Augsburg, Bavaria, Germany.

Our current Pope Francis saw the image while studying in Germany and promoted her veneration in Latin America. The painting was donated around 1700 by Hieronymus Ambrosius Langenmantel (1641-1795) a canon of the Monastery of Saint Peter in Augsburg.

The donation is said to be connected with an event in his family. His grandfather Wolfgang Langenmantel (1586-1637) was on the verge of the separation from his wife Sophia Rentz (1590-1649) and therefore sought help from Jakob Rem, a Jesuit priest in Ingolstadt. Father Rem prayed to the Blessed Virgin Mary and said: “In this religious act, I raise the bonds of matrimony, to untie all knots and smoothen them”. Immediately peace was restored between the husband and wife, and the separation did not happen. In the memory of this event, their grandson commissioned the painting of the “Untier of Knots”. Beautiful isn’t it.

The first Chapel to be named “Mary, Untier of Knots” was completed in 1989 in Styria, Austria, inspired as a supplication in response to the Chernobyl Nuclear Tragedy. The image of “Mary, Undoer of Knots” is especially venerated in Argentina and Brazil, where churches have been named for her and devotion to her has become widespread and which the Guardian called a “Religious Craze “.

This Catholic devotion has grown since Jorge Mario Bergoglio, S.J. who is now Pope Francis, after a tenure as Archbishop of Buenos Aires, brought a postcard of the painting to Argentina in the 1980s after seeing the original while studying in Germany. The devotion reached Brazil near the end of the 20th century. According to Regina Novaes, of the Institute of Religious Studies in Rio de Janeiro, Mary, Untier of Knots “attracts people with small problems”. Bergoglio had this image of Mary engraved on a chalice he presented to Pope Benedict XVI.

On the 8th of each month, thousands of people make the pilgrimage to pray to Mary, Undoer of Knots .

May our Mother, Mary the undoer of knots untie all knots in our lives, Amen.

Share this
Previous PostThe story behind Our Lady of Perpetual Help Next PostThe Antivirus Called Hope. Easter Message from the President of SIGNIS