Home Ghana News Feast of The Most Sacred Heart of Jesus 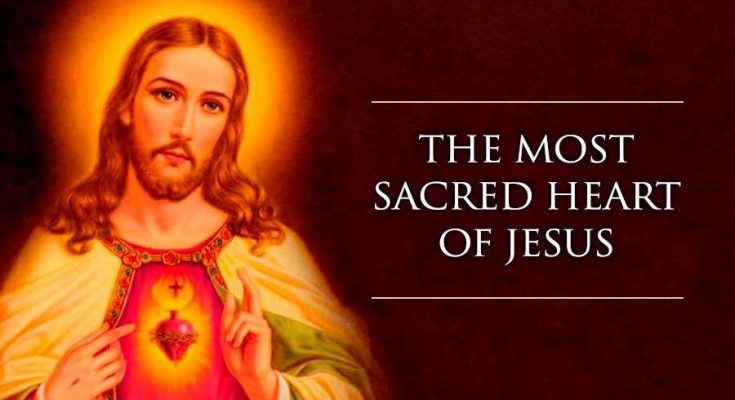 Feast of The Most Sacred Heart of Jesus

The liturgical Solemnities of the Most Sacred Heart of Jesus is celebrated the first Friday after the octave of Corpus Christi, or 19 days after Pentecost Sunday.

This devotion is especially concerned with what the Church deems to be the long-suffering, love, and compassion of the HEART of Christ towards humanity. The popularisation of this devotion in its modern form is derived from a Catholic nun from France, Saint Margaret Mary Alacoque, who got the devotion from Jesus during a series of apparitions to her between 1673 and 1675.

Later, in the 19th century, from the mystical revelations of another Catholic nun in Portugal, Blessed Mary of the Divine Heart, a religious of the Good Shepherd, who requested in the name of Christ that Pope Leo XIII consecrate the entire world to the Sacred Heart of Jesus.

Saint Bernard said that the piercing of Christ’s side revealed His goodness and the charity of His heart for us.

From the 13th to the 16th centuries, the devotion was propagated but it did not seem to have been embellished. It was practiced everywhere by individuals and by different religious congregations, such as the Franciscans, Dominicans, and Carthusians.

St. Bonaventure wrote: “Who is there who would not love this wounded heart? Who would not love in return Him, who loves so much?” It was, nevertheless, a private, individual devotion of the mystical order. Nothing of a general movement had been inaugurated, except for similarities found in the devotion to the Five Holy Wounds by the Franciscans, in which the wound in Jesus’ heart figured most prominently.

St. Mechtilde reported that Jesus appeared to her in a vision and commanded her to love Him ardently and to honor His Sacred Heart in the Blessed Sacrament as much as possible. He gave her His heart as a pledge of His love, and a place of refuge during her life and as her consolation at the hour of her death. From this time, Mechtilde had an extraordinary devotion for the Sacred Heart and said that if she had to write down all the favors and all the blessings which she had received by means of this devotion, a large book would not contain them.

The most significant source for the devotion to the Sacred Heart in the form it is known today was Saint Margaret Mary Alacoque who lived from 1647–1690.

She was a nun of the Order of the Visitation of Holy Mary, who received apparitions of Jesus Christ in the Burgundian French village of Paray-le-Monial, the first on 27th December 1673, on the feast of Saint John the Evangelist, and the final apparitions, eighteen months later, revealing the form of the devotion. The chief features being reception of Holy Communion on the first Friday of each month,

Eucharistic adoration during a “Holy hour” on Thursdays, and the celebration of the Feast of the Sacred Heart. She said that in her vision she was instructed to spend an hour every Thursday night to meditate on Jesus’ Agony in the Garden of Gethsemane.

In June or July 1674, Sister Margaret Mary said that Jesus requested this devotion to be honored under the figure of His Heart. She said that He appeared radiant with love, asked for a devotion of expiatory love, frequent reception of Communion, especially on the first Friday of the month, and the observance of the Holy hour.

During the octave of Corpus Christi in 1675, on June 16, the vision known as the “great apparition” reportedly took place, where Jesus said: “Behold the Heart that has so loved men.

Instead of gratitude, I receive from the greater part of humankind only ingratitude,” and asked Margaret Mary for a feast of reparation of the Friday after the octave of Corpus Christi, bidding her consult her confessor Father Claude de la Colombière, then superior of the small Jesuit house at Paray le Monial.

Happy feast day to us all.

Saint of the day: Sts. Mark and Marcellian, Martyrs

One thought on “Feast of The Most Sacred Heart of Jesus”