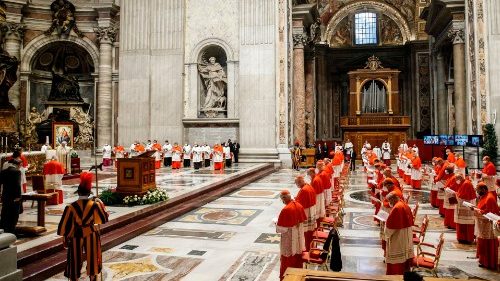 Who are the 13 new cardinals created by Pope Francis from around the world? They hail from Africa, Asia, the Americas and Europe…

Here are brief biographies of the Church’s newest cardinals.

Cardinal Mario Grech of Malta is the general secretary of the Synod of Bishops.  The 63-year old former Bishop of Gozo was ordained a priest on May 26, 1984.  With a licentiate and doctorate from Rome’s Pontifical Lateran University and the Angelicum respectively, he has held several posts, including teaching, in the Church in Malta.  Pope Benedict appointed him bishop in 2011 and Pope Francis called him to Rome as pro-secretary general of the Synod of Bishops.  He was appointed is General Secretary on September 15, 2020.

Cardinal Marcello Semeraro from Italy’s Apulia region is the Prefect of the Congregation for the Causes of Saints in the Vatican. Ordained a priest on September 8, 1971, the 72-year old cardinal taught dogmatic theology ecclesiology following his studies in Rome’s Pontifical Lateran University.  Appointed Bishop of Oria in 1998 he was transferred to Albano Diocese in 2004.   In 2013, Pope Francis appointed him secretary of the “Council of Cardinals”, which advises him on the government of the Church and the Roman Curia.  On 15 October 2020, Pope Francis appointed him the head of the Congregation for the Causes of Saints.

Cardinal Antoine Kambanda, Archbishop of Kigali  (Rwanda), lost his family, except a brother, in the genocidal war of 1994. After his studies in Burundi, Uganda and Kenya, where he also did his philosophical studies, he returned to Rwanda.   The 62-year old cardinal was ordained a priest by Saint John Paul II in Rwanda 1990,  after which he taught in the Minor Seminary of Ndera (Kigali).  He has a doctorate in moral theology from Rome and has headed the Caritas of Kigali and the diocesan Commission for Justice and Peace. Pope Francis appointed him Bishop of Kibungo in 2013 and transferred him to the Archdiocese of Kigali in 2018.

Cardinal Gregory Wilton, Archbishop of Washington, USA, is from Chicago, Illinois, where he completed his philosophical studies. Ordained a priest in 1973, he obtained a doctorate in liturgy from Rome’s Pontifical Athenaeum of Saint Anselm. He was appointed Auxiliary Bishop of Chicago in 1983, Bishop of Belleville in 1993, Archbishop of Atlanta in 2004 and Archbishop of Washington in 2019.  He was president of the United States Conference of Catholic Bishops (USCCB) from 2001 to 2004.

Cardinal Jose F. Advincula, Archbishop of Capiz, Philippines, ordained a priest for the archdiocese in 1976.  The 68-year old cardinal was the spiritual director of the St. Pius X Seminary, where he was also professor and dean of education.  He studied Psychology and Canon Law between Manila and Rome, obtaining a licentiate in Canon Law. Back home, he served in the seminaries of Vigan, Nueva Segovia and in the regional seminary of Jaro. In 1995 he was appointed rector of the St. Pius X Seminary of Capiz and became the Defender of the Bond, promoter of justice and finally judicial vicar of the archdiocese.  He was appointed Bishop of San Carlos in 2001 and was transferred to Capiz as archbishop in 2011.

Cardinal Celestino Aós Brac O.F.M.Cap, is the Archbishop of Santiago, Chile.  Born in Artaiz, Spain, the 75-year old cardinal was sent Chile in 1983, where he worked in a parish and served as treasurer of the Capuchins in the country.  Later, he also served in the ecclesiastical courts of Valparaiso Diocese and Concepción Archdiocese and was treasurer of the Chilean Association of Canon Law.  Appointed Bishop of Copiapó in 2014, he was appointed apostolic administrator of the Archdiocese of Santiago in March 2019 and was nominated its Archbishop December that year.

Cardinal Cornelius Sim, is the Apostolic Vicar of Brunei.  The 69-year old electrical graduate and engineer was ordained a priest in 1989.  In 1997, when Saint Pope John Paul II separated Brunei from the Diocese of Miri-Brunei and established the Apostolic Prefecture of Brunei, he appointed the cardinal as its prefect.  When Brunei was raised to the rank of Apostolic Vicariate, he was appointed its first Apostolic Vicar.  He thus became the country’s first bishop.

Cardinal Augusto Paolo Lojudice, Archbishop of Siena-Colle Val d’Elsa-Montalcino, Italy,  was ordained a priest in 1989.  He has held several responsibilities in Rome Diocese, such as spiritual father at the Pontifical Roman Major Seminary and the parish priest of San Luca al Prenestino.   In 2015, he was appointed an Auxiliary Bishop of Rome.  In May 2019, Pope Francis appointed him Archbishop of Siena-Colle Val d’Elsa-Montalcino. Currently, he serves as secretary of the Commission for Migration of the Italian Bishops’ Conference (CEI).

Cardinal Mauro Gambetti, an Italian priest of the Order of Friars Minor Conventual ( OFM Conv), was consecrated bishop on November 22, in view of the consistory.   The 55-year old graduate in mechanical also has a licentiate in theological anthropology.  Ordained a priest in 2000, he was elected superior of the Conventual Franciscans of St. Anthony’s Province, Bologna.  In 2013 he was called to serve as the Custos (guardian) of the Sacred Convent of Saint Francis in Assisi, until 2017.

Cardinal Felipe Arizmendi Esquivel of Mexico is the Bishop Emeritus of San Cristóbal de las Casas.  Ordained a priest in 1963, the 80-year old cardinal has held several responsibilities in his native Toluca Archdiocese. He was appointed Bishop of Tapachula in 1991.  He has served as general secretary of the Conference of Latin American Bishops (CELAM).   In  2000, Saint Pope John Paul II appointed him Bishop of San Cristóbal de Las Casas.

Cardinal Silvano Maria Tomasi of Italy is a Scalabrinian Missionary is a former apostolic nuncio and Holy See’s permanent observer to the United Nations.  Ordained a priest in 1965, the 80-year old cardinal served as director of the US bishops’ Pastoral Care of Migrants, Refugees & Travelers.  From 1989 to 1996, he was secretary of the Vatican’s Pontifical Council for the Pastoral Care of Migrants and Itinerant People, after which he was appointed archbishop and Apostolic Nuncio to Ethiopia and Eritrea.  In 2000, he was appointed apostolic nuncio to Djibouti. From 2003 to 2016 served as the Holy See’s permanent observer to the UN offices and other organizations in Geneva.   In 2016, Pope Francis appointed him a member of the former Pontifical Council for Justice and Peace, now the Dicastery for Promoting Integral Human Development.

Cardinal Raniero Cantalamessa OFM Cap is the Preacher of the Papal Household.  The 86-year old Italian graduate in theology and classical literature is a former professor of the University of the Sacred Heart of Milan.  A former member of the International Theological Commission, he left teaching in 1979 to devote himself to the ministry of the Word. Pope John Paul II appointed him the Preacher of the Papal Household in 1980, a post that Pope Benedict XVI and Pope Francis have also confirmed.  His numerous books have been translated into many languages.

Cardinal Enrico Feroci of Italy is the parish priest of the noted Roman Marian sanctuary of Divino Amore (Divine Love).  The 80-year old cardinal was ordained a priest in 1965 and held several responsibilities in Rome Diocese.  He was appointed Chaplain of the Pope in 1995. Since 2017 he has been Rector of the Sanctuary of Divino Amore and since 2018 Rector of the Seminary of Our Lady of Divine Love. In 2019, he was appointed parish priest of the sanctuary.