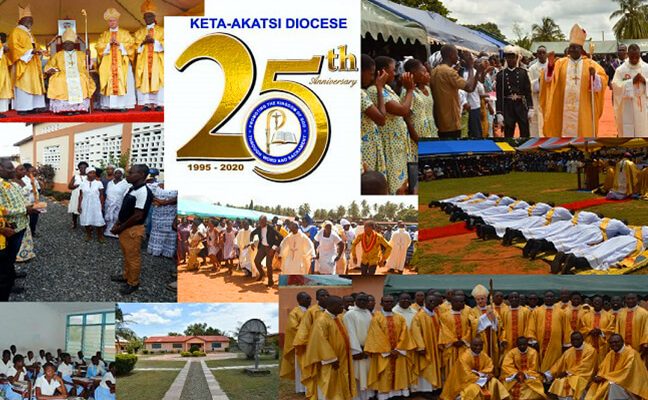 The church is alive in the diocese of keta-akatsi

THE CHURCH IS ALIVE IN THE DIOCESE OF KETA-AKATSI : MY OPINION ON 25-YEARS OF PASTORAL INFLUENCE. (COMPILED BY CEPHAS KOFI NOBLE AFORNU)

There is no doubt that the church in the diocese of Keta-Akatsi made a lot of positive -psychological, Spiritual, Social, Health, Family life, Academic, Moral and economic impact on the people of Ketu South, Ketu North, Akatsi South, Akatsi North, Keta, Anlo, South Tongu, Central Tongu and North Tongu districts/municipalities of the Volta Region of Ghana for its 25years of Catholicism pastoral influence since its erection in March 1995.

In light of such tremendous and remarkable impact one could boldly acclaimed “The church is alive in the Diocese of Keta-Akatsi “ as the church rejoices for what God has done in her life it is equally prudent to cross examine how much the church has fared as a Diocese, as a Deanery, as a Parish , as a Clergy and as a lay faithful in the light of the two major pastoral congress held at Abor on the 6th to 12th October, 1997 and Akatsi Torve on the 23rd to 29th October, 2005 respectively to give a focus to  the pastoral influence to God’s people within the sectorial jurisdiction of the diocese.

An annual pilgrimage to the Sacred Heart Shrine at Dzodze-Tornu on the first Sundays of Advent has been one of the very first activity to boost up the spiritual life and offer a platform for uniting the diocese. The youth also have the opportunity to run an annual pilgrimage during the season of Lent at the same Shrine. Students annual Grotto activity at the Shrine cannot be over-emphasized.

A minor seminary established at the St. Paul’s SHS remains a credit for promoting priestly vocation for the diocese. 53 diocesan priests were ordained within the 25years journey of the diocese as at October, 2020. The diocese was also privileged to ordain some missionaries within the period under review. We surely need more vocation to carter for the growing catholic population and parishes in the diocese. The Diocesan Catholic Charismatic Renewal in partnership with the Accra Archdiocesan Marriage Counselling Centre organized and trained at least two married people from each parish. These trained peoples were officially handed over to parishes and marriage counselling was officially launched for the parishes. Pastoral follow up on marriage counselling in the parishes is needed to beef up the family life apostolate. Post marital Counselling programme is needed to sustain and maintain marriages celebrated. There would be a need for a diocesan coordinating team to shape marriage counselling in the newly established parishes and quasi parishes. Couples for Christ also made an attempt to impact on family life apostolate within the journey. A well-structured marriage catechesis to take care of pre-marital, and post marital programmes will turn families into the expected domestic church.

The church truly exists to evangelize as its true identity. As part of the evangelizing mission of the diocese within the past 25years, 5 new parishes, 8 new quasi-parishes and 4 rectory were created in addition to the 10 parishes started with. There is definitely the need for new such outlets to enable the clergy to get closer to the people of God.

The health providing centres saw a tremendous improvement in terms of extension, infrastructure development and provision of new services. Cuniberto Clinic at Lume in the Akatsi South district and St. Ann’s Polyclinic at Tagadzi in the North Tongu district of the Volta Region were built and comissioned. The St. Anthony Hospital in Dzodze, Ketu North district can boast of a physiotherapy and orthopedic centres, the Joseph Cramers Optical Centre in the Keta municipality is having a great phase lift whilst the Richard Novati Hospital at Sogakope in the South Tongu district can’t wait to build an ultra-modern maternity care unit being considered.

The diocese can boast of the St. Catherine Senior High School at Agbakope for educating girls. The Keta Convent Basic School also saw a great rehabilitation. The celebration of annual catholic education week in our basic schools, the celebration of weekly mass by parishes and the administering of the sacraments in the schools announces and express the presence of the church in the schools and make the focus although we have a number of non-Catholics dorminating teaching in our schools. Catholic priests serving as chaplains in non-Catholic school throughout the diocese offering pastoral care and counselling to the challenging adolescent, celebrating mass and administering the sacrament to students who may not have such opportunities after school is very recommendable as it helps to build their catholic faith and identity. The yearly students’ pilgrimage to Dzodze Tornu before students commence the final year exams is fantastic.

Various youth activities and projects like production of an album took place. The executive summary with which the diocese begun with as one of its working tools revealed that the youth who are the future of the church in the diocese of Keta-Akatsi Forms majority of the population of the church.

There is therefore the need for workshops on career development, and various entrepreneurial skill training to equip the youth to remain with the church and not migrate to urban centres for the greener pastures. Good moral upbringing, individual and group counselling, premarital seminars and workshops could be organized to motivate the youth.

Few parishes tried to organize and run a welfare for their parishioners. The diocese held a lot of diocesan celebrations which brought all the clergy and the lay faithful together to celebrate our God. There has been a yearly diocesan homecoming usually in July to raise fund to support the financial need of the church in the diocese. There has been a yearly pilgrimage on every first Sunday of advent was a unifying gathering of both the clergy and the lay faithful for a spiritual revival and also for raising funds to support the diocese financially. The church needs to continue the teachings and conscientization that it began on the bringing on board all and sundry to make the concept of self-reliance a reality in all parishes.

There has been a regular sacrament of baptisms, admission to holy communion and confirmation in all parishes including the celebration of the other sacraments. Catechism lessons precede such sacraments. The teachings ought to contribute greatly to the faith formation of God’s people. There is the need for a common detailed syllabus to guide what goes into faith formation throughout the diocese and during preparation to receive the sacraments.

The diocesan faith and culture commission worked on the rites for outdooring and widowhood rites in the perspective and teachings of the church. They are still working on other areas necessary. However, there is the need to go deeper into our culture vis-à-vis the teachings of the faith. The concept of multiple allegiance of Catholic faithful in the diocese has been identified as an area that needs critical attention of Catechesis to assist the faithful grasp deeper meaning of the faith professed in Christ and stop mingling their faith with other faith that is not in tune with the one pronounced in Christ.

“In my Father’s House” an orphanage run by the Comboni Missionaries at Abor remains a consolation home for the vulnerable, marginalized the under-privileged. The St. Theresa Centre for the handicapped serves as an opportunity for the physically challenged to acquire some skill training. The Good Samaritan Home for the physically and mentally challenged operated by the Guanellians situated at Adidome gave the church in Keta-Akatsi diocese a plus for the care of less opportune individuals.

The diocese can boast of a well-built Bishop residence of the Bishop which began at the St. Theresa handicap at Abor Agbledzi and later on to Akatsi the current Viglin lodge. The diocesan secretariat which began from Akatsi Cathedral now locates at its permanent place at Torve. The formation programmes of the faithful which used to take place at Abor parish and sometimes Adidome parish now take place at a permanent pastoral centre also at Torve, a number of newly built and renovated parish houses as well as church buildings.

The church in the diocese of Keta-Akatsi is indeed alive. More grease to the elbow of all those who made various input to keep the Catholic faith growing. Let us move together as a family to fan into flame the various gifts that God endowed us with so as to make the church more vibrant than before. As I wish the diocese fruitful years ahead, I warmly welcome a strategic plan being embarked upon. God bless us all.