Home Ghana News The Archdiocese of Tamale gets new priests 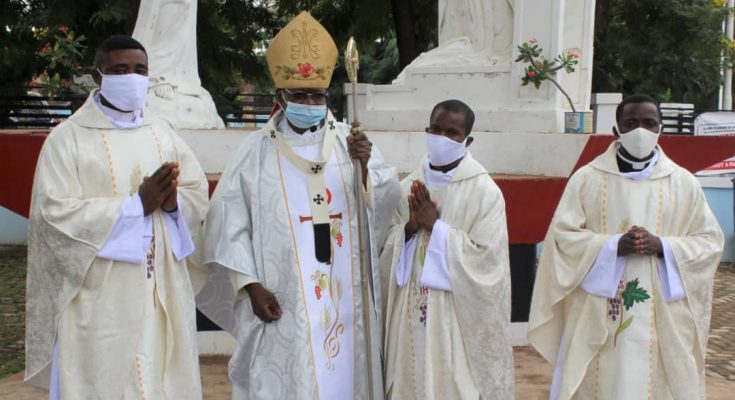 The Archdiocese of Tamale gets new priests 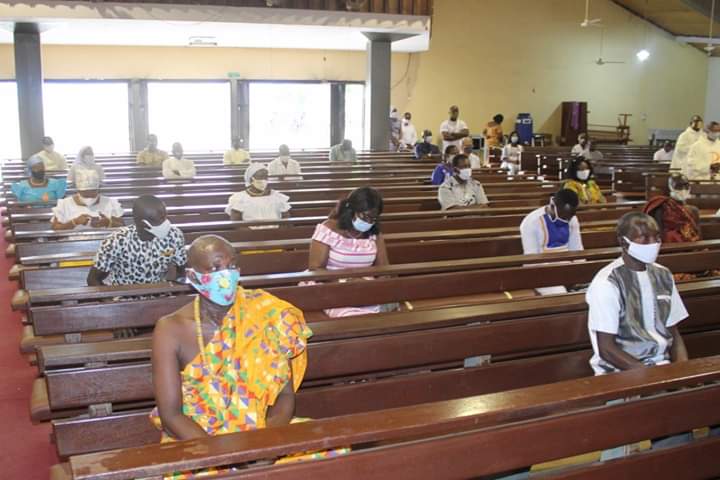 The ordination Mass took place at the Our Lady of Annunciation Cathedral in Tamale on June 27, 2020. The mass was restricted to only a handful of the faithful, the religious, seminarians and 35 concelebrating priests due to Covid-19 pandemic. 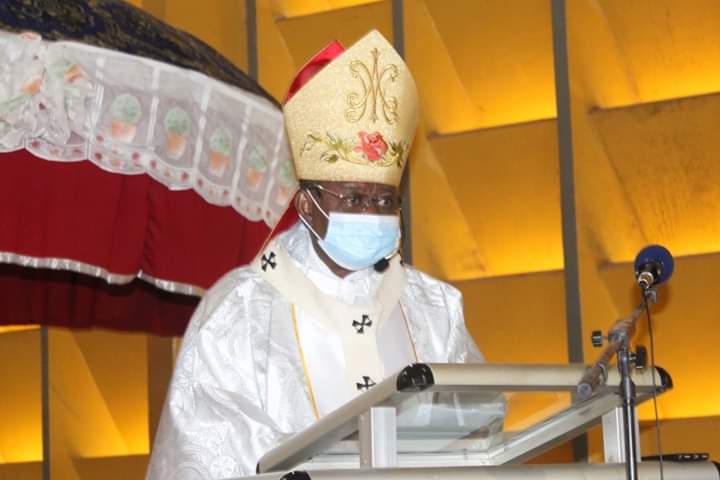 Archbishop in his homily made a call on priests to be mindful that their ordination does not take away their capacity to sin.

The Archbishop expressed his gratitude to the faithful of the Archdiocese for their generosity towards their priests during the period of the ban on public and religious gatherings and also for supporting the formation of priests. 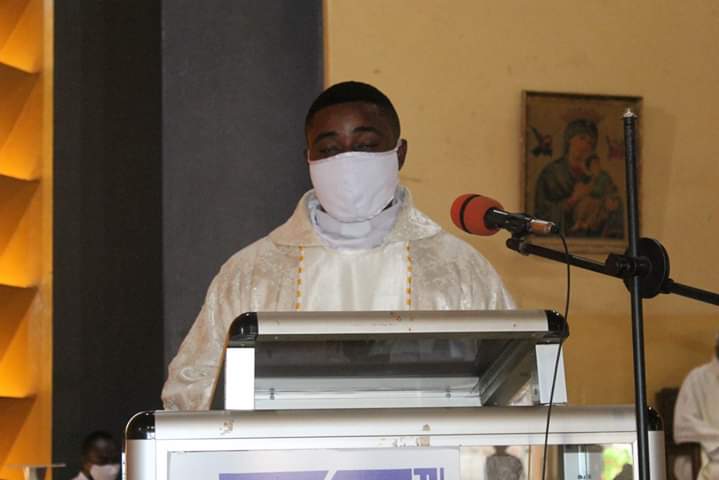 Rev. Fr. Minnow, on behalf of the newly ordained priests, expressed their gratitude to the Archbishop, their parents, Formators, benefactors, parishes, Ordination Planning Committee, Societies, and all who in diverse ways support them during their formation and ordination.

Profile of the newly ordained priests 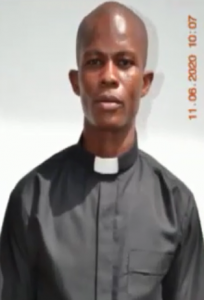 Rev. Fr. Charles Monkonsoh was born in Tamale on 22nd January 1987 to Mr. Albert K. Monkonsoh of blessed memory and Helena Yaa Asunki. Born in a Catholic family, he was baptized as an infant by late Monsignor Balee in the OLA Cathedral Tamale. He started school at St. Peter’s primary school here in Tamale.

When he was in primary one, the family was displaced by the 1992 conflict commonly known as the Guinea fowl war. With time the family relocated from Tamale to Balai a village in the Kpandai District.

He told Father that he would like to be a priest. Fr. Sebastian smiled and told him that he is the Vocations Director and that when the time of application comes he should not tell him he has changed his mind.

From St. Augustine Millennium Major Seminary, he furthered his seminary formation to St. Victor’s Major Seminary from 2016-2020 where he studied theology for four years and a year of pastoral experience at Holy Cross Parish.

He returned to the seminary after pastoral year and was ordained a deacon on the 23 of November 2019 with sixteen of his classmates. Saturday 28 June 2020 he is ordained a priest for the Catholic Archdiocese of Tamale. 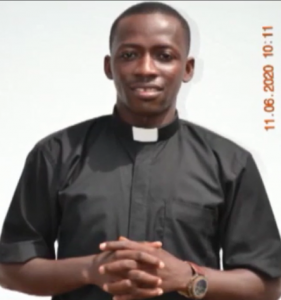 Rev. Fr. Vitus Zogho hails from Kanguol, a village under Piina in the Upper West Region. He was born into a Christian family on May 29 1987 at Piina to Mr. Denis Zogho and Madam Zita Daaro both of blessed memory. Vitus is a twin and the third born among six siblings (four boys and two girls). His father was an Assistant Agric Extension Officer and his mother a trader. He had his basic education at Piina.

As a small boy growing at Piina, under the care of his parents, life was quite easy for him and his siblings. At Primary four (4), Vitus began to develop the desire of becoming a priest ignited by the preaching of late Rev. Fr. Jacob Lekuu, then curate in Piina Parish.

In 1994, Fr. Vitus lost his father and had to be cared for together with his siblings by his uncle. Unfortunately in 2001, his mother was also called to glory. The demise of both parents hit Vitus so hard that not only did coping in life became so tough for him and his siblings, his hope and desire of becoming a priest in the future also literally died off. However, guided by the Holy Spirit,

Fr. Vitus and his three brothers united and agreed on a decision for one of them to drop out of school and engage in a daily wage job popularly known as ‘by-day’ in order to raise some income to support the rest of the siblings in school. The big question rather was who among the four boys should drop out of school and take that challenge? After casting lots, it fell on Fr. Vitus. In fact, it was a very difficult challenge for him to embrace since dropping out of school at that time meant that his dream of becoming a priest would never be achieved. However, out of the love he had for his siblings, he accepted the challenge.

In the year 2003, Fr. Vitus traveled to Accra in search of a job to assist in taking care of his brothers in school. God being so good, he got employed as a security man at the American Embassy and that really enabled him to fend for himself and supported his brothers schooling which was a heavy burden on his two elder sisters, Vivian and Veronica.

After working with the security firm for two (2) years, nine (9) months, through Divine intervention, Fr. Vitus encountered Most Rev. Philip Naameh, then bishop of Damongo diocese, who decided to take him back to school.

In the year 2006, Bishop Philip got him to be enrolled at St. Cyprian’s Minor Seminary Secondary School in Sawla, present day Savannah region. It was at that moment that he began to re-develop his desire of becoming a priest.

In 2009, Fr. Vitus was among the pioneers who successfully completed St. Cyprian’s Minor Seminary Secondary School after writing and passing the West African Senior School Certificate Examination (WASSCE). Inspired by the Holy Spirit and guided by good counsel, Fr. Vitus applied to the Major Seminary and later gained admission to begin formation at St. Michael’s Propaedeutic Major Seminary, Kaleo in the Upper West region in 2011.

After one year of spiritual formation in Kaleo, he proceeded the following year to St. Augustine Millennium Major Seminary (SAMMS) in Tamale where he underwent three years of philosophy studies. Having successfully completed his philosophy studies in May 2015, he proceeded that same year to St. Victor’s Major Seminary (SVS) to begin his Theology studies.

In 2018, Fr. Vitus had his pastoral year experience at the OLA Cathedral and returned to SVS in August 2019 for his final year of formation. On November 23, 2019, he was ordained a deacon together with 16 others by Most Rev. Philip Naameh. 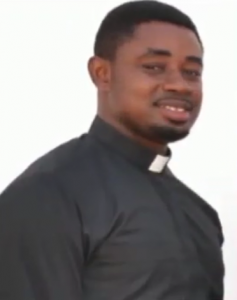 Rev. Fr. Isaac Kelvin Minnow hails from Kakomdo in Cape Coast in the Central Region of Ghana. He was born to late Mr. Andy Ben Kwofie and Madam Cecilia Abban on September 17, 1988. He is the eldest among three children. He had his basic education in Kakomdo M/A Basic School and Living God Preparatory J.S.S all in Kakomdo and completed in 2004.

Fr. Kelvin was a very committed Altar server. He loved to serve priests at Mass whether it is raining or not, in the night or in the day. This got him so close to most of the priests and the seminarians who visited his community from the parish and the St. Peter’s Regional Seminary respectively. He had the privilege of going with them to visit the aged and the sick to pray for them before or after Mass. He also had the honor of eating at the same table with them sometimes after Mass. All these were some of the inspirations to his call to the priesthood.

After a series of constant communication and investigations, he was allowed to apply to the seminary and started his seminary formation in 2011 in St. Michael Major Seminary in Kaleo in the Upper West Region. In 2012, he came to St. Augustine’s Millennium Seminary in Tamale for his three-year Philosophical studies. In 2015, he proceeded to St. Victor’s Major Seminary for four years of Theological studies and a year of Pastoral experience in St. Kizito’s Parish in Kpandai. In 2020, he completed his seminary formation successfully.

For God’s own Greater Glory, June 27, 2020, he was ordained by Most Rev. Philip Naameh into the Catholic Priesthood for the Archdiocese of Tamale, Ghana. 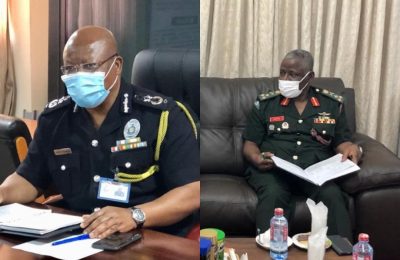 IGP and CDS praise Catholics working in their institutions 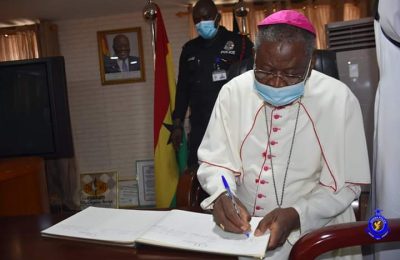