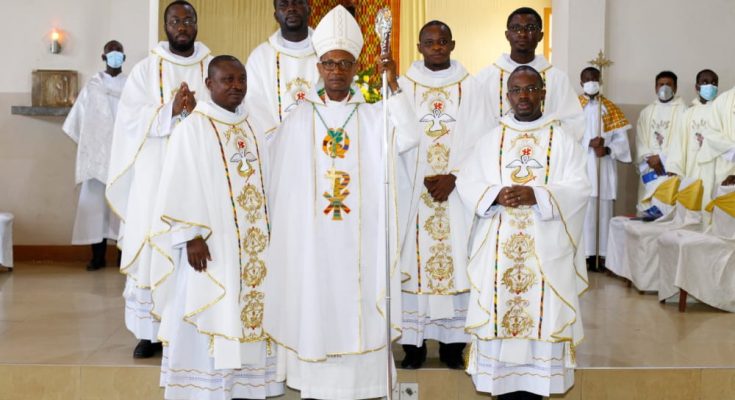 The Ghana-Liberia Province of the Society of the Divine Word, SVD has over the weekend welcomed into their midst, six newly ordained priests for the society.

The ordination ceremony was held at the St. Charles Lwanga Parish, Abeka, a second time host of SVD ordinations in the country.

This year’s ceremony which was initially scheduled for July 25, 2020, was postponed to 24th October 2020 due to the Coronavirus Virus pandemic.

Read their profile below 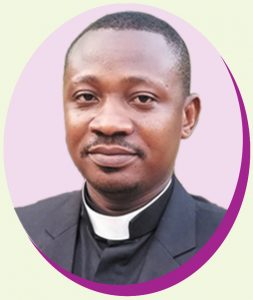 Rev. Fr. Marvin Gyasie, SVD, is a Ghanaian born at Ashaiman in the then Tema Municipality on the 6th of June, 1985. He is a Parishioner of St. Augustine Catholic Church, Ashaiman. Marvin began his basic education at Datus School Complex, Tema Community Seven Branch but completed at New Happy Home Academy, Ashaiman. He continued at St. Abed’s Junior Secondary School in Pankrono- Tafo in the Ashanti Region and proceeded to Our Lady of Mercy Senior Secondary School at Tema Community Four from 2004-2006.

He joined the Divine Word Missionaries (SVD) in the year 2010 at St. Joseph Freinademetz House of Philosophy where he studied philosophy for three years. He then continued his formation at the Divine Word Novitiate at Nkwatia- Kwahu for a year and proceeded to profess his First Vows as a religious on the 6th of July, 2014.

Marvin went to the Democratic Republic of Congo to study French for nine months and after a year was transferred to the Ghana Province to begin his Theological Studies at St. Victor’s Major Seminary. He was assigned to St. Michael’s Catholic Church at Nsawkaw in the Tain District of the Sunyani Diocese for his pastoral year experience after three years of his Theological Studies.

Marvin professed his Final Vows in the Society of the Divine Word on the 15th of November, 2019, and was ordained as a Deacon in the Holy Roman Catholic Church on the 23rd of November, 2019 by Most Rev. Philip Naameh, the Metropolitan Archbishop of Tamale. He holds a Bachelor of Arts Degree in Religious Studies from the University of Ghana, Legon, as well as a Bachelor’s Degree in Sacred Theology from the Pontifical Urban University, Rome.

He likes listening to music, playing football and watching movies. He derives inspiration and motivation from Isaiah 54:17 which says,” My child, no weapon forged against you will succeed. Any voice raised against you in court, you will refute”.

He is appointed to USA 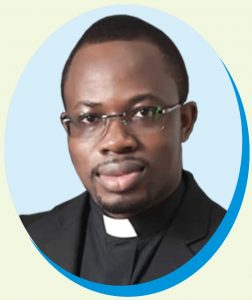 Rev. Fr. Vincent Amuzu- Asafo, SVD, a twin, is the son of Mr. Isaac Asafo-Amuzu and Madam Mary Anthony Kaxoxo. He was born on the 5th of October 1990 in Koforidua in the Eastern Region of Ghana.

He had his primary education at Koforidua Anglican School (1996-1998) Betom, Presbyterian school at Akropong (1998-2000), and then at Battor Roman Catholic school (2000-2004). His Junior High education was at Battor Roman Catholic Junior High School from 2004 – 2006. After successful completion of his Junior High education, Rev Vincent gained admission in 2006 to Bishop Herman (College) Senior High School in Kpando in the Volta Region where he studied General Arts and completed in 2009.

In June 2010, he gained admission to the Saint Joseph Freinademetz House of Philosophy (Postulancy) in Tamale to begin his priestly formation; he studied Philosophy from 2010 – 2013 at St Augustine’s Millennium Major Seminary, Tamale.

Upon successful completion of his Philosophical studies, Rev Vincent was admitted to the Divine Word Novitiate in Kwahu-Nkwatia, Ghana from 2013-2014. After successfully completing his canonical year, he professed his first vows on the 6th of July 2014 in the Society of Divine Word.

On the 15th of January 2020, Rev. Vincent professed his Perpetual Vows in the Society of Divine Word at Paroisse Notre Dame D’Afrique Lemba Kinshasa and was ordained to the Transitory Diaconate on the 15th of February 2020 by His Eminence Fridolin Cardinal Ambongo Besungu, Ofm Cap, Metropolitan Archbishop of Kinshasa.

The favorites scripture quotation of Rev Vincent is Jn 15: 16 “You did not choose me, no, I chose you and appointed you to go out and bear fruit, fruits that will last” 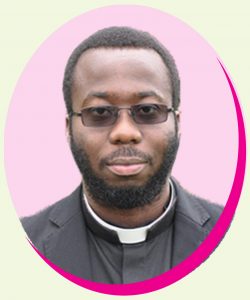 Rev. Fr. Courage Mawuenyega Eric Nordor, SVD, a native of Blekusu in the Volta Region of Ghana was born at Sekondi in the Western Region to Eric Leo Nordor and Juliana Sebuabe.

After completion of his secondary education, he began his formation in the Society of the Divine Word in July 2011 at St. Joseph Freinademetz House of Philosophy, in Tamale during which he pursued a three-year Philosophy programme at St. Augustine Millennium Seminary, Tamale and completed in May 2014. Thereafter, he was admitted to the Divine Word Novitiate at Nkwatia Kwahu in July 2014 where he professed his First Vows after completing his one-year Novitiate programme in July 2015.

He was then assigned to the SVD Common Formation Centre (CFC) in Nairobi — Kenya for his four year Theological Studies which he began in August 2015. In July 2017, Courage had his Pastoral Year in Ghana during which he was assigned to St. Charles Lwanga Catholic Church, Abeka — Accra until July 2018.

After the successful completion of his Pastoral Year, Courage returned to the SVD Common Formation Centre (CFC) in Nairobi – Kenya in July 2018 to continue his Theological Studies. Courage professed Perpetual Vows in the Society of the Divine Word on 5th August 2019 and was subsequently ordained into the Sacred Order of Deacons on 10th October 2019.

Courage draws his inspiration from these words: The LORD put out His hand and touched my mouth; and He said to me,” Now I have put my words in your mouth” (Ier 1:9) because” holiness does not make you less human, since it is an encounter between your weakness and the power of God’s grace.” (Gaudete et Exsultate, 34). 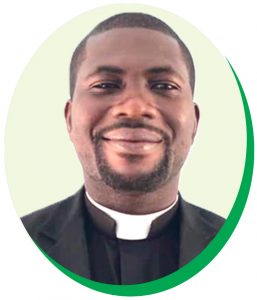 Rev. Fr. Abraham Mario Teye, SVD, hails from Krobo-Odumasi. He is the third born of his parents. Mario began his elementary school at Sun Star Preparatory School and then continued to Creator Primary School.

He gained admission into St. Martin’s Senior High School. Mario was admitted into St. Joseph Freinademetz House of Philosophy to study philosophy for three years after the successful completion of his Senior High Education. Abraham was again admitted into the Divine Word Novitiate at Nkwatia-Kwahu on the 30th of June, 2014 for spiritual formation.

After three years of Philosophical Studies, Mario was assigned to the Common Formation Centre, Tamale to pursue his Theological Studies at St. Victor’s Major Seminary for a period of four years. He spent one year at St. Mary Mother of God Catholic Church, Adeemmra for his pastoral experience.

Mario professed his Perpetual Vows on 15th November, 2019 at the Carmelite Chapel in Tamale. On the 23rd of November, 2019 he was ordained a Deacon by Most Rev. Philip Naameh, Metropolitan Archbishop of Tamale.

His hobbies are football and volleyball. His favourite Bible quotation is” I thank Christ Jesus our Lord, who has given me strength, because he considered me trustworthy in calling me to ministry… (1 Tm.1:12—13). 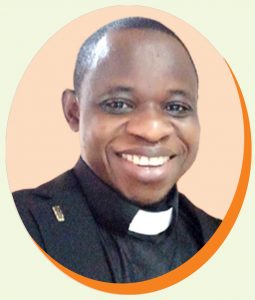 Rev. Fr. Constancio Koh, SVD, hails from Jirapa-Duori in the Upper West Region of Ghana. He was born on 20th September 1980 to Nangzie Koh and Tampoge Vivian. He had his basic education in Duori from 1990-2000. He attended Lawra Senior Secondary School from 2001 to 2003 and Tumu College of Education from 2004 to 2007.

He had his Philosophical Studies and formation in St. Joseph Freinademetz House from 2011 to 2014, one-year Novitiate at Nkwatia -Kwahu, and professed his First Vows on 5th July 2015. He proceeded to study Theology in St. Victor Major Seminary, Tamale for a period of four years.

He had a one-year pastoral experience at St Charles Lwanga Parish, Abeka. He

professed his Perpetual Vows on 15th November 2019 at the Carmelite Chapel in Tamale. He had his Diaconate Ordination on 23rd November 2019 by Most Rev. Philip Naameh, Metropolitan Archbishop of Tamale.

His favorite Bible quotation is” Here I am! I am coming to do Your will” (Hebrew 10: 9). He has reading, football and gardening as his hobbies.

He is appointed to Philippines 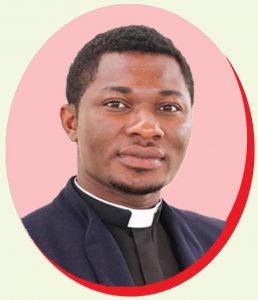 Rev. Fr. John Jerome Asidigbe, SVD, hails from Vume in the Volta Region of Ghana. He was born on 23rd June 1988 to Mr. Philip Asidigbe and Juliana Aniaku Asidigbe of blessed memory. He is the fifth child among seven siblings. Jerome is a parishioner of St. Joseph the Worker Catholic Church, Vume in the Archdiocese of Accra.

He began his basic education at Vume R/C Primary School between 1993 and 2001 and later moved to Sogakope Comboni Complex School until 2004. In the same year, he gained admission to pursue his secondary education at Sogakope Senior High School and graduated with WASSCE certificate in 2007.

Rev. Jerome’s journey into the priesthood commenced in 2010 when he was admitted to St. Joseph Freinademetz Formation House to pursue his philosophical studies at St. Augustine Millennium Major Seminary in Tamale. Thereafter, he was admitted to the Divine Word Novitiate at Nkwatia-Kwahu, for a year, where he professed his first Religious Vows on 6th July 2014.

He was subsequently sent to the SVD Common Formation Centre in Nairobi-Kenya to pursue his theological studies at Tangaza University College. In the course of his studies in 2016, he opted to undergo the SVD pastoral orientation program known as the Over-Seas Training Programme (OTP) for two years in Spain.

Rev. Jerome returned in July 2018 to the Common Formation Centre, Nairobi to continue his formation programme. He professed Perpetual Vows on 5th August 2019 and was ordained a Deacon on 10th October the same year by Most Rev. David Kamau, the Auxiliary Bishop of the Archdiocese of Nairobi.

Among the languages he speaks are English, Ewe, and Spanish.

Jerome draws his daily inspiration from, John 6:68” Lord to whom we shall go? You have the message of eternal life”

He is appointed to Spain

Who are the SVDs?

The Divine Word Missionaries (SVD) is an international Catholic Missionary Congregation of Priests and Brothers. The Latin name for SVD is: ” Societatis Verbi Divini”. They are also known as ”Society of the Divine Word”.

It was founded by St. Arnold Janssen, a German Catholic Priest from the diocese of Munster in 1875. Presently it has a membership of over 6,000 spread in over 70 countries. It ministers primarily in areas where the Gospel has not been preached at all or only insufficiently and where the local Church is not yet developed. In 1938 when the first SVDs arrived in the then Gold Coast, they took over the then Accra mission in old cocoa shed on Derby Avenue and named it “Sacred Heart Church”. From there the early SVD missionaries spread out and shared their lives with the people in different ministries. Currently, they work in the Archdioceses of Accra and Tamale; the Dioceses of Koforidua, Sunyani, Techiman, Yendi, Ho, and Navrongo-Bolgatanga and the vicariate of Donkorkrom. The Ghana province has extended to Liberia where they work in the Archdiocese of Monrovia and the Diocese of Cape Palmas.

There are over 150 Ghanaian-born SVDs of which about half are spreading the good news in different parts of the world.

In addition to Parish, School, and other ministries, the Society of the Divine Word (SVD) has four priority areas known as Characteristic Dimensions which are: Mission Animation, Biblical Apostolate, Communication, Justice, Peace and Integrity of Creation.

Share this
TAGSVD Ordination
Previous PostAgony of a pope: what he said and what they heard Next PostNational Director of Catechetics, Rev. Fr. Akoto-Mensah marks silver jubilee