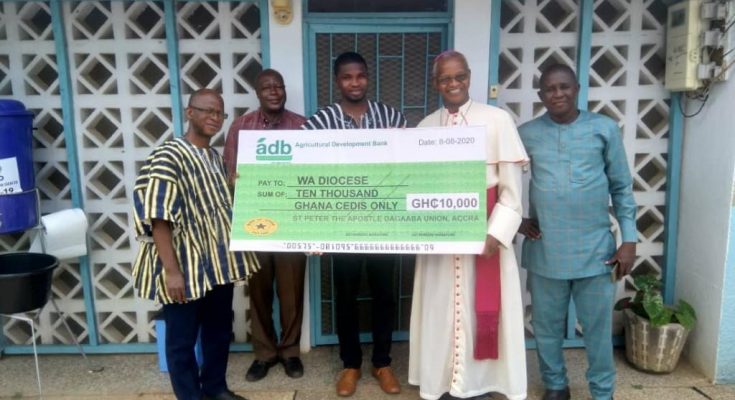 Receiving the donation, the Bishop of Wa could not hide his sincere gratitude and thankfulness for the kind gesture to the Diocese by the Union. He said, the donation came as a big support as he is about starting the first phase of the project. He mentioned that the Wa Diocese is currently using temporary structures to accommodate 7 aged and sick priests.

He further indicated that, the donation will form part of the local counterpart funding and contribution in applying for external support.

According to him, they were building the Priest Home which is really befitting and adapted to the priests unique situations in terms of age, health challenges and disabilities. The facility will provide for ease of movement, praying, dinning, recreation and the best of care and support.

The structure when completed shall have; a Chapel, 4 Chalets, Dining and sitting area, recreation centre, clinic, places for a resident nurse and driver as well as other facilities to ensure comfort for these retired and aged priests. When completed the structure shall be able to accommodate up to 20 retired priests and a place for visitors.

Whilst appreciating the support of other Catholics resident outside of the diocese, he urged all to emulate the work of the St Perter the Apostle Dagaaba Union, Accra Archdiocese to come together. This will also afford them the opportunity to also collectively join forces to come home as a unit to support the Home Diocese.

It needs to be recalled that the St. Peter Dagaaba Union comprises all Catholic Dagaaba resident in the Archdiocese of Accra. The union was inaugurated on the Saturday 23rd of February 2019 at Queen of Peace Catholic Church, Madina, Accra by the Bishop of Wa, Most Rev. Richard Kuuia Baawobr M. Afr.

Making the presentation on behalf of the Union, the Chairman of the Union, Mr JohnBosco Laaso, indicated among other things that the Union aims to mobilize resources (human & materials) which are considered necessary to support the Home Diocese in its’ Christian evangelism.

Giving a brief background to the formation of the Union, Mr Laaso said, the idea of one ethnic group to one common saint name within the Accra Archdiocese was the brainchild of His Grace, Most Rev. Charles Gabriel Palmer-Buckle, the former Metropolitan Archbishop of Accra Archdiocese.

The name “St. Peter the Apostle” was chosen in honour of His Servant, Peter Cardinal Dery Porekuu, likening his works and contributions to the growth and development of Christianity in the northern part of Ghana, especially in the Upper West Region. The name was also to honour St. Peter the Apostle, the disciple of Jesus Christ.

The Chairman said, the Union is just a year old and that the donation was the Union’s maiden and modest contribution to support the works of the Bishop. He also reiterated that, while the Union would concentrate on supporting the Bishop, he encouraged individual Dagaaba Catholic faithful of the Wa Diocese across Ghana and abroad to make it a conscious effort to individually support the various parishes in the Diocese in both cash and kind.

Mr Laaso, on behalf of the entire membership of the Union, expressed profound gratitude and appreciation to Very Rev. Fr. Nimorious Domanzing (SMA), the Spiritual Director and Patrons/Patronesses for the immense support the Union enjoys from formation to date.

The three-member delegation, led by the Chairman, also on behalf of the Spiritual Director, Patrons/Patronesses, Executive Council and the entire membership of Union of the Archdiocese of Accra, presented a letter of congratulations to Bishop Richard Kuuia Baawobr M. Afr. on his new appointment as a Member of the Pontifical Council for the Promotion of Christian Unity by the Holy Father, Pope Francis. The letter stated that, the Union received with great joy the news of his appointment. It further stated that, the Bishop’s appointment is a testimony of his hard work and dedication to the Universal Catholic Church as well as the impact of his services to humanity.

The team took time to visit the Priest Home project site and temporary residence to see the construction works and also interacted with retired Priests.

Share this
TAGAccra Archdiocese Catholic Diocese of Wa.
Previous PostPope Francis: Free Mary from associations with the mafia Next PostNEWLY APPOINTED APOSTOLIC ADMINISTRATOR OF SEKONDI-TAKORADI DIOCESE URGES YOUTH TO “BE AMBASSADORS OF PEACE” 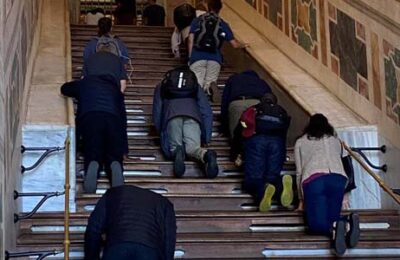