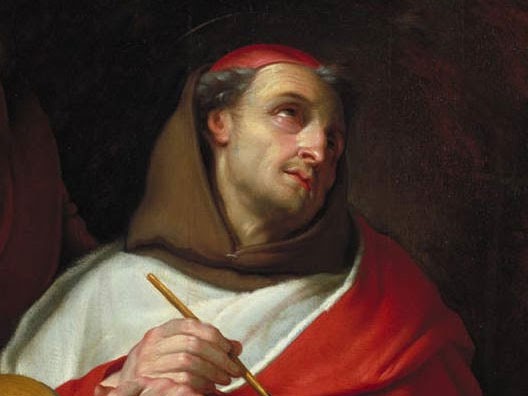 Francis was born on 10th March 1549 in Montilla. He was the third child of Mateo Sánchez Solano and Ana Jiménez. He was educated by the Jesuits, but felt drawn to the poverty and penitential life of the Franciscan friars. At the age of twenty, he joined the Order of Friars Minor at Montilla, entering the novitiate at St. Lawrence Friary, which was located in a place of great natural beauty. The community there belonged to the Reformed observance within the Order, following a very strict routine of prayer, silence and fasting.

Francis followed this regimen rigorously, always going barefoot, abstaining from meat, and wearing a hairshirt throughout that entire year. As a result, however, his health was permanently affected, leaving him sick and fatigued.

Solano was solemnly professed in 1569. He was then sent to the friary of Our Lady of Loreto in Seville for his seminary studies. There, he learned not only philosophy and theology but developed his musical talents. He was then ordained in 1576, a ceremony his mother was unable to attend due to her poor health. He was named Master of Ceremonies for the community. Still a lover of simplicity, Francis made a small cell for himself by the chapel of the friary, made of clay and reeds.

After completing his final theological studies, Solano was assigned as an itinerant preacher to the surrounding villages of the region. He was eventually given a license as a confessor. During this period, he requested that he might be allowed to go to North Africa, with the hope of achieving martyrdom for preaching the Catholic faith. He was denied this request. At that point, Solano shifted his vision to the American missions.

After the death of his father, Solano returned to his hometown of Montilla to care for his mother. During that time, he gained the reputation of a wonderworker, as a number of people were cured of their afflictions through his intercession. In 1583, he tended the sick and dying in Granada as a pestilence broke out.

In later years, King Philip II requested the Franciscans to send missionaries to preach the Gospel in the Americas. In 1589, Solanus sailed from Spain to the New World, and having landed at Panama, crossed the Isthmus and embarked on a vessel that was to convey him to Peru. During the journey, a storm at sea crashed his ship against the rocks not far from Peru. The crew and the passengers abandoned the ship, but Francis stayed with the slaves who were on board and after three days, were rescued.

For twenty years Solano worked at evangelizing the vast regions of Tucuman, present day northwestern Argentina and Paraguay. He had a skill for languages and succeeded at learning many of the regions’ native tongues in a fairly short period. It is said he could also address tribes of different tongues in one language yet be understood by them all. Amazing.

Being a musician, Solano also played the violin frequently for the natives. He is often depicted playing this instrument. After that came Solano’s appointment as guardian of the Franciscan friary in Lima, Peru. He filled the same office for the friaries of his Order in Tucuman and Paraguay. Around 1601, he was called to Lima, Peru, where he tried to recall the Spanish colonists to their baptismal integrity. It is said that Solano predicted the devastating 1619 earthquake of Trujillo, Peru.

In Humahuaca, every day at precisely 12 noon, on the city hall belltower, heavy copper doors slowly open and a life-sized animated wooden, dramatic-looking statue of San Francisco Solano appears for about two minutes and gives his benediction to the silent crowd amassed on the village plaza. Francis died at Lima.

Happy feast to Francis. St Francis, pray for us. Amen

Share this
TAGSaint of the day St. Francis Solano
Previous PostSaint of the day: St. James the greater, Apostle & Martyr, Patron of Spain Next Post32 years a Priest; a trip to the Shepherd’s corner