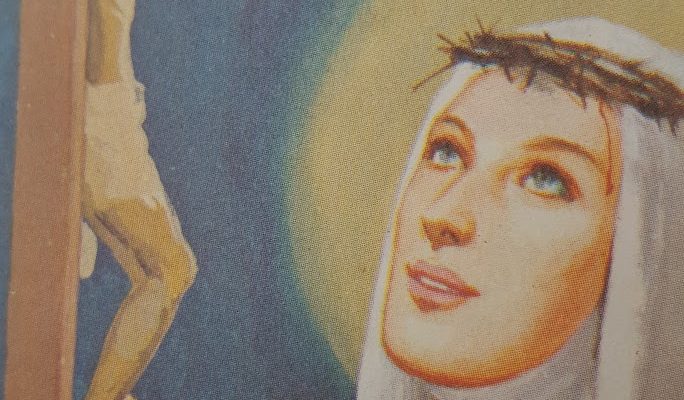 Saint of the day: St. Catherine Of Siena, Patroness of Fire Prevention

Catherine was the last to the youngest of a very large typical Catholic family of twenty – four (25) siblings. Yeah. A very typical Catholic family. Catherine had a twin sister called Giovanna of whom both were born prematurely when their mother was forty years old. Unfortunately, Giovanna died in her infancy and almost half of her siblings died before they could reach adulthood due to high child mortality rate. In 1353, at the age of six, she had a vision in St Dominic’s Church in which our Lord appeared to her and blessed her.

She felt that our Lord wanted her to do some special work, so she prepared for it by penance and fervent prayer. Her confessor wrote that when she was twenty-one years old, she had another vision where Christ wed her as His bride and even put a ring on her finger. Amazing! Wouldn’t you want to be in her place?

Her parents wanted her to marry, but she put on the robes of the Sisters of the Third Order of St Dominic and devoted herself to the care of the poor. She had many temptations but overcame them through constant prayer. Her sound advice and wisdom were sought by civil leaders, and even by the Pope.

The Popes had been living in France instead of in Rome for many years because of the settled times. Catherine made a special visit to Pope Gregory XI and said, “Holy Father, God wants the head of His Church to live in Rome. I pray that you will go there as soon as possible”. And once again Rome became the home of the Popes.

Catherine’s last days were full of suffering, which she offered up for all Christians. Our Lord granted her a vision showing the beauty of a soul in the state of grace. She died at the age of thirty-three. She is also one of our incorruptible. Her lifeless body still lay fresh today.

She is famously known as the Bride of Jesus because she said Jesus had placed a ring on her marriage finger, dedicating her to Himself. She loved Him with everything within her. She was also blessed with the stigma of Jesus and honoured as a Doctor of the Church.

St. Catherine, pray for us.
Happy feast day to all Catherine.