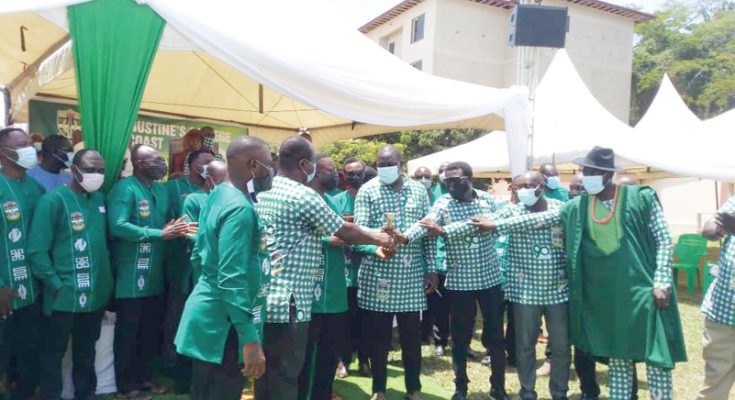 The Archbishop of the Catholic Archdiocese of Cape Coast, Most Rev. Charles Gabriel Palmer-Buckle, has called on students to adequately prepare themselves to meet the demands of society especially in the face of the COVID-19 pandemic and post-COVID-19.

He said if students looked beyond the challenges confronting the global community and resolved to seek solutions that might come as a result of the pandemic, they would make a positive impact in the wider community.

“The future will be bright if our generation of today, especially students, brace yourselves to confront the reality of COVID-19 today and in the coming years”.

Most Rev. Palmer Buckle said this in an address at the 91st anniversary celebration of the school, held in Cape Coast last Saturday.

The Archbishop, who recently recovered from COVID-19, indicated that the pandemic and life after the pandemic would require creative thinking that would help societies conveniently live meaningful lives.

For the first time in the history of the school’s celebrations, the event was restricted to only old students, school management and other guests as a precautionary measure, the students were exempted, the reason it was held at a durbar ground off the college campus.

A professor of Virology at the Noguchi Memorial Institute for Medical Research (NMIMR), Prof. George Armah, who is also an old student of the college (APSU ‘74), was the Guest Speaker while the Managing Director of EDC, a subsidiary of Ecobank Ltd, Mr Paul Mante (APSU 1995), chaired the function.

Some Forms Two and Three students were recognised for their academic excellence, and while the prizes were announced, arrangement had been made for them to pick up their prizes at the college’s administration office.

While encouraging students to work harder to face these new times, the Archbishop also stressed that the school’s administration and parents had critical roles in grooming students to rise above the challenges of the current situation.

“Rising above the COVID-19 situation” as your theme for this year’s celebration calls for grooming of our future scientists towards finding a definitive cure, once and for all, to this and viral infections of all kinds”.

Prof. Armah, in his speech, emphasised the need for the continuous observation of the protocols to curb the spread of the pandemic.

He said COVID-19 had come to stay, thus there was the need for institutions to put in place systems that would prevent the spread of the virus but at the same time, ensure that life returned to normal by among other things, encouraging people to take the vaccines made available.

The Chairman, Mr Mante, commended the organisation of the ceremony in the midst of COVID-19 and indicated that the collaboration by 1995 and 1996 year groups should encourage more APSUNIAN year groups to come together to hold the speech days on an even bigger scale in coming years.

He commended the setting up of the College Endowment Fund and expressed the hope that old students would support it with funds so the investment would grow.

As part of activities to mark the 91st anniversary celebrations of the school, two legacy projects undertaken by two APSU year groups, were commissioned.

While the 1995 year group refurbished the College Library, the 1996 year group took up the kitchen re-tooling project

The kitchen retooling cost of GH¢400,000 and the project included the provision of 12 new commercial stoves, reconstruction of a kenkey shed, refurbishment and replacement of equipment and tools, among others.

The convener of the APSU ‘96 year group, Mr Charles Nortey Narh, explained that the decision to provide the school’s kitchen with new adapted tools was birthed by the need to ensure that workers carried out their duties diligently in a safe environment without endangering the lives of students.

The immediate past Headmaster of the school, Mr Joseph Connel, who held the fort from 2008 to 2020, was honoured with a citation and an undisclosed amount of money for his contribution towards the growth of the school, especially, in the area of discipline.

He was eulogised as a leader who instilled discipline in students and maintained a calm environment during his tenure.

The all-male senior high school established by the Catholic Church to serve as a training college and seminary, started at Amissano, a village near Elmina, in 1930.

On August 6, 1933, the Catholic Church and the Bishop of Cape Coast Vicariate, Monsignor W. T. Porter, decided to have a separate Catholic school, and Cape Coast was found to be the most suitable location and a commemorative foundation stone was thus laid in 1935 at the present site.

Rev. Fr Maurice B. Kelly, the thenDean of the Training College at Amisano, became the first Headmaster of St Augustine.