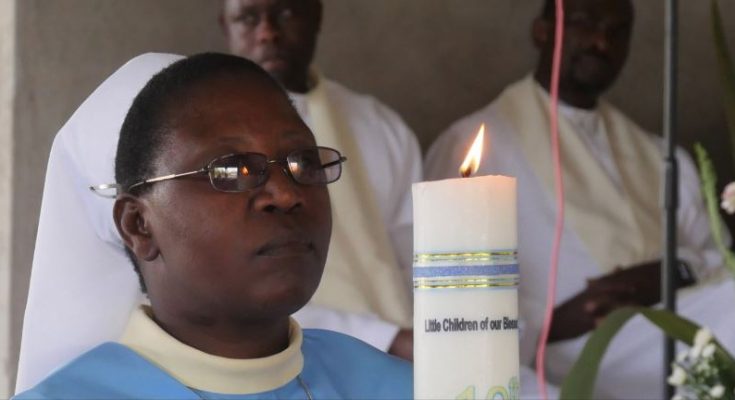 Like
Post Views: 1,833
In a very warm and symbolic gesture, of passing on a lit and neatly decorated candle to Sr Anita Jonga, Sr Illumina Katsukunya completed her six year service as the Mother General of the Little Children of Our Blessed Lady (LCBL) Sisters.
The handover and installation of the new Council was presided over by Archbishop Robert Ndlovu (Archdiocese of Harare). The ceremony, which occurred within the celebration of Holy Mass, was held at Regina Mundi Convent in Harare on 9 November 2019. This follows the completion of the congregation’s 10th Chapter held in Chinhoyi Diocese in August 2019.
Sr Anita Jonga was elected as the new Mother General to lead the congregation for the next six years under the theme ‘Consecrated and Rooted in Christ for Mission.’
She will be assisted by a five member council that comprises Sr. Tariro Kuvheya (Vicar), Srs. Veronica Masikinye, Grego Dakudzwa and Rujeko Muchabaiwa.
Accepting her role, Sr Anita committed to a continual discernment guided by God’s word.
She receiving her new responsibility, Sr Anita said, “I accept what the Lord has entrusted to me and the team. We shall try to listen and continually discern our mission in the life and word of God. I am confident that good will and support will carry us to the end of the six years.”
“We will model our lives on the theme Consecrated and rooted in Christ for Mission. I encourage all sisters to assimilate the vision so that it can transform their hearts to conform to Christ’s values”, she added.
She also emphasised the need for all sisters, as missionary disciples, to collaborate with the Church and society in diverse and relative ways of evangelization.
Archbishop Ndlovu exhorted the new council to ‘have a heart able to contain and to receive all the sisters, so that they may find shelter in the leadership’s presence.’
He invoked the protection of Holy Mother Mary, to accompany and guide the leadership that “they may be women of faith, women of courage and women of commitment who put God first in their lives.”
In his homily, Jesuit Provincial, Fr Chiedza Chimhanda SJ, reminded the new team and all the religious sisters that the new role of the council is not their own human mission but Jesus Christ’s.
He said, “we want to thank God for the gift of the LCBL Sisters, who have been called to serve God in their humility, in their calling. This work is not theirs, it’s a mission of the Church, it’s a mission of Christ and God chose them to serve him.”
LCBL Sisters are the second largest female religious congregation in Zimbabwe, after the SJI Sisters, with 196 professed LCBL Sisters.
The congregation was founded by the then Archbishop of the Archdiocese of Harare, Aston Ignatius Chichester SJ, in 1932 as the first local congregation with a diocesan right. Its members make a vowed commitment to the service of God and society.
The congregation, moved by its spirituality of cheerfulness, simplicity and humble charity, currently operates in Harare, Chinhoyi and Gokwe Dioceses, and also has a member in Masvingo diocese.
Some of the well-known apostolates run by the LCBL Sisters include pastoral work in different parishes and missions, Regina Mundi Primary School, Kasipiti Children’s Home and St Barbra Clinic in Chegutu among many other commitments in the health and education sectors.
Source : JESUIT COMMUNICATIONS ZIMBABWE
Share this
Previous PostTreat joblessness among youth as national emergency – Catholic Bishops to government Next PostAccra Archdiocesan sensitisation programme on December 17 referendum launched