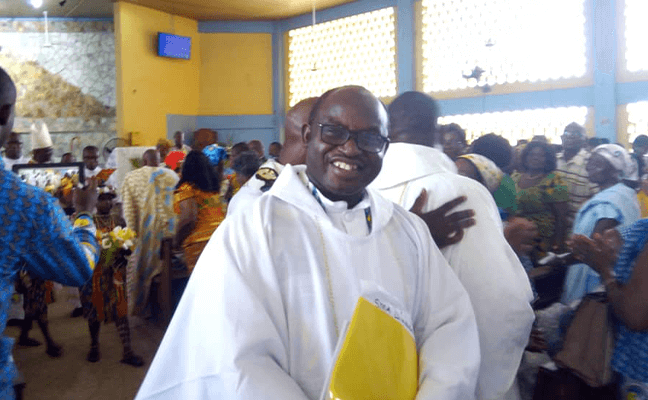 The Ghana Region of the society of African Missions has seen a change in status after its elevation from a Region to a Province. This revelation was made by the former Regional Superior, Very Rev. Fr. James Owusu Yeboah at the ordination Mass of Rev. Fr. Paschal Ayi Guddah SMA at the Queen of Peace Catholic Church in Accra last week.

Fr. Owusu noted that the elevation is historic as it coincides with the 140th anniversary of the mission in Ghana. He said the declaration was made at the congregation’s General  Assembly in Rome early this year.

“Out of the General Assembly came new statutes for different countries and among these,  Ghana, Nigeria , Ivory Coast, and Togo have amalgamated from what was known as a Region to a Province. When we were a Region, we were directly under Rome and a District. We are now autonomous though we have some allegiance to Rome, we are now autonomous in terms of finance and personnel,” he said.

The Society of African Missions popularly known as the SMA Fathers is a Society of Apostolic life founded on the 8th of December 1856 in Lyon, France and was entrusted with the new Apostolic Vicariate of Sierra Leone in 1858. It was there that two priests and a brother left from in November 1858. Accompanied by two other missionaries.

Bishop de Bresillac joined them on May 14, 1859, at the time when a severe epidemic of Yellow Fever was raging in Freetown (and all his confreres) on June 25, 1859, six weeks after his arrival.

The SMA being a clerical Society of Apostolic Life of Pontifical Right placed under the Jurisdiction of the Congregation for the Evangelization of Peoples, has purpose of responding to the missionary mission of the Church, especially among Africans and peoples of African descent.

The arrival of the SMA Fathers in Ghana is synonymous to the history of the Catholic Church in Ghana. On 18th May1880 Fathers Auguste MOREAU and Eugene MORAT arrived in Elmina.

The SMA has a unique charism of establishing a “local clergy”. By this expression we mean forming a diocesan clergy capable of running the affairs of its own Church. We have done this by opening seminaries to train priests (diocesan) for dioceses in Africa in fulfillment of the intention of the founder “Bishop Marion de Bresillac”. This explains why the SMA did not accept Africans into the Society until 1983 when the General Assembly of the SMA decided to accept the vocation of Africans.